Among a large number of earnings reports over the next day and a half are some of the S&P 500’s largest companies.  After the bell tonight, Apple (AAPL) and Facebook (FB) are set to report and Amazon (AMZN) will release earnings tomorrow night.  For all three of these names, Q1 earnings have tended to be a solid quarter.

Starting with a look at Apple (AAPL), as shown in the snapshot from our Earnings Explorer below, Q1 has been the quarter with the highest EPS beat rate and is tied with Q2 for the strongest sales beat rate.  While it is also the quarter where the company has raised guidance the lowest percentage of the time, the stock price reaction in Q1 has tended to be pretty strong.  AAPL has risen in reaction to Q1 earnings 58% of the time with an average full-day gain of 1.88%. That ranks as the second-best quarter in both respects.  It is also the least volatile quarter with an average move of 4.27%.  While those results are fairly positive, taking a look at the past few years, the stock has only seen positive reactions when it has reported a triple play. 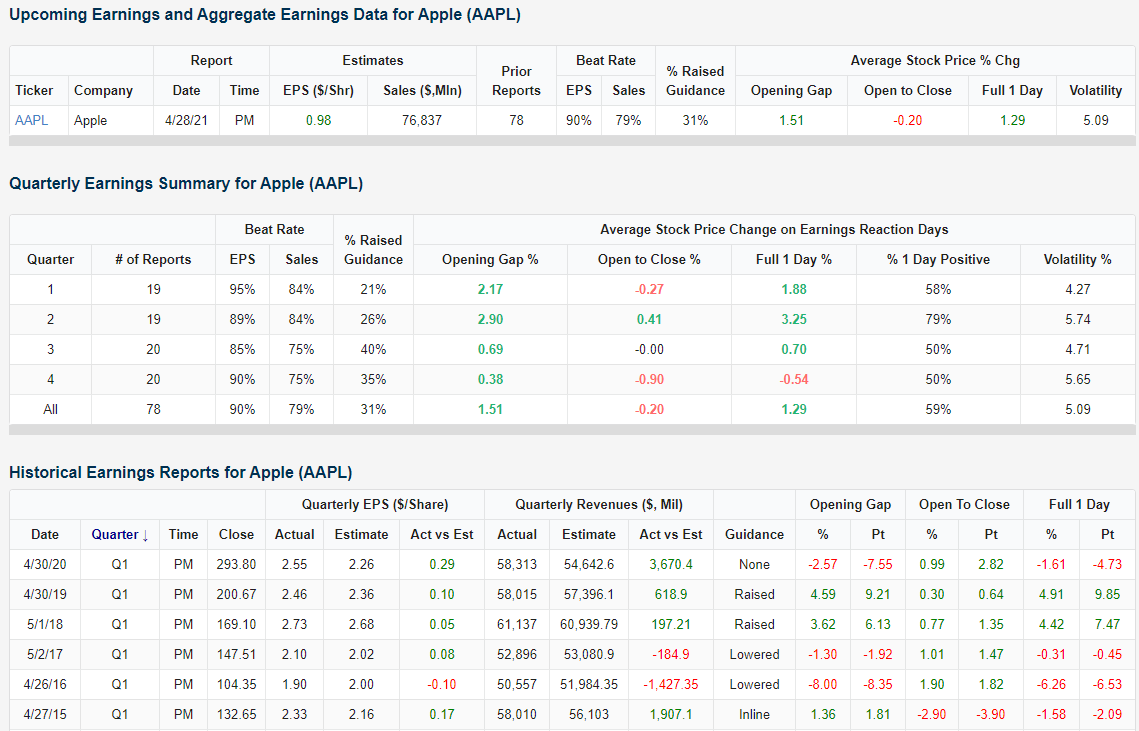 Facebook (FB) is entirely different.  Q1 is actually the quarter with the worst beat rates for EPS and sales.  In spite of this, it has been less volatile than other quarters and has also averaged the second strongest full-day performance with a gain of 3.64%. Most of that move comes from the opening gap of 4.6%; the best of any quarter.  Also, no other quarter has been as consistent to the upside in terms of stock performance with a full day move higher 63% of the time.   In fact,  FB has not fallen in reaction to Q1 earnings since 2017. 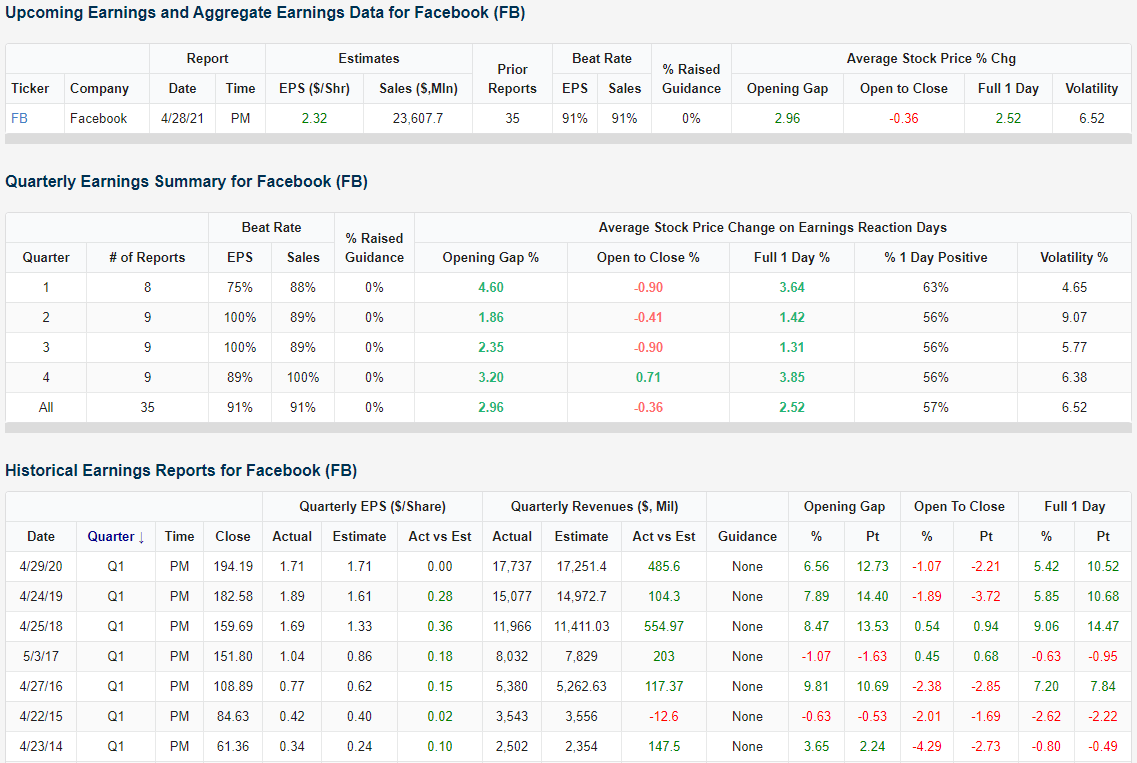 Amazon (AMZN) is perhaps the best of these companies on first-quarter earnings. The stock has risen the day after reporting 63% of the time averaging a 4.21% move higher; the strongest performance for the stock of any quarter.  Q3 and Q4 have typically seen AMZN trade lower despite guidance having been raised more often.  Last year, the stock was hit hard after reporting Q1 results with a 7.6% decline, but prior to that, the stock was on a five-year streak of positive reactions for the comparable quarter. Click here to view Bespoke’s premium membership options for our best research available. 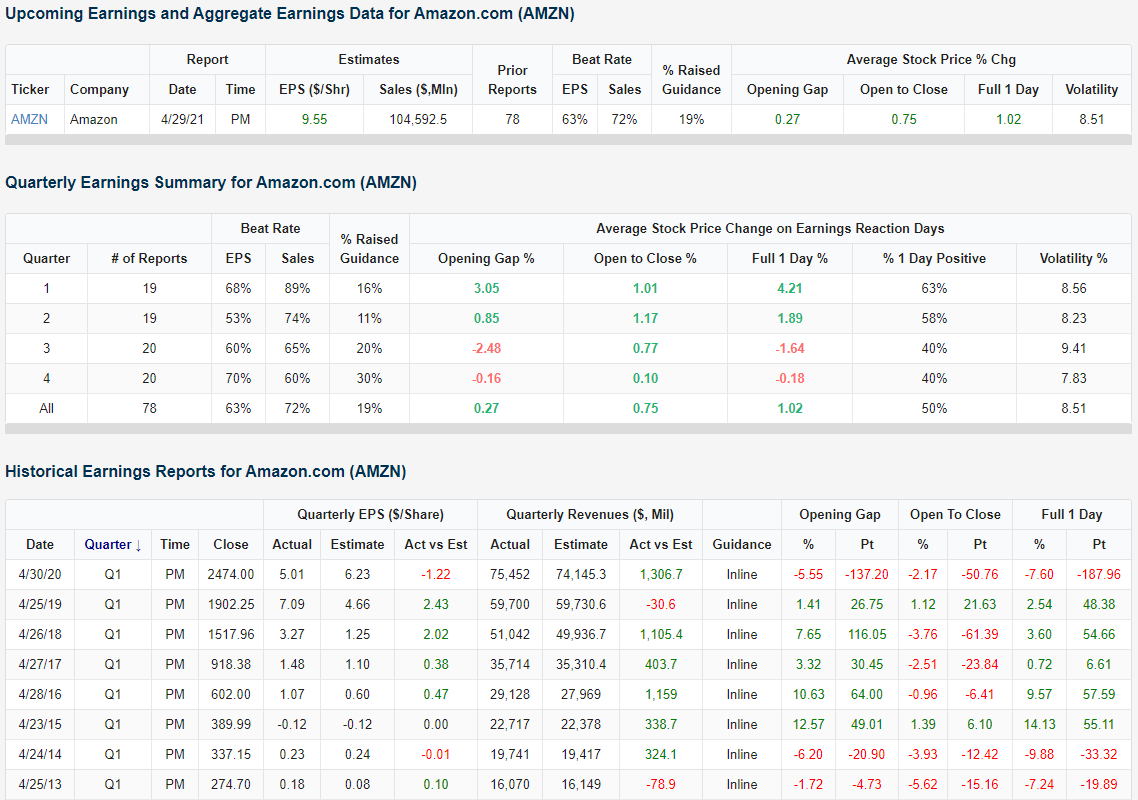