Media & Chinese Education Tech Carried Out On A Stretcher

This week we’ve seen a popular long blow up in a way that recalls the mess in GameStop (GME) earlier this year. As shown below, legacy media stocks like ViacomCBS (VIAC) and Discovery (DISCA) went parabolic since November. Fox (FOXA) also benefited, though to a much smaller degree. VIAC and DISCA both tripled in just a few months as hopes of a robust economic recovery boosting ad revenue and, more importantly, the potential for streaming riches similar to Disney (DIS) and its Disney+ platform helped fuel gains. But over the last four days, most of those gains have been incinerated. The catalyst appears to have been a secondary offering from VIAC a few days ago, with $1.7bn of shares sold into the $50bn market cap that existed at the time.

Since that secondary, the stock has been more than cut in half. There have also been rumors of a big, leveraged position by an unnamed fund having its portfolio seized and liquidated by its prime brokers. There have also been huge blocks of stock reported at dealers, with Goldman Sachs (GS) reportedly getting tapped to sell a block equivalent to more than 6% of VIAC’s free float and a second block equivalent to more than 12% of DISCA’s free float. In a reversal of the GME mess, VIAC has 18.5% of its float sold short, while DISCA’s short base is 29.7% of float. This particular blow-up is a win for shorts.  Start a two-week free trial to Bespoke Institutional to access all of our analysis and market commentary. 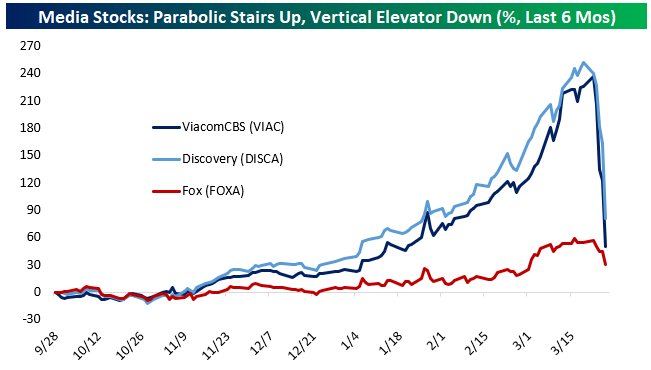 Another similar collapse has been playing out in Chinese education technology stocks listed in the US as ADRs. GSX Techedu (GSX) is down over 50% today, with a block offered by a dealer equivalent to almost 9% of the float. A similarly-sized block relative to float is also reportedly on offer in IQ. These names haven’t seen the same sort of parabolic gains as the media stocks above, but they’re a similar clustered theme that’s getting carried out to end the week. 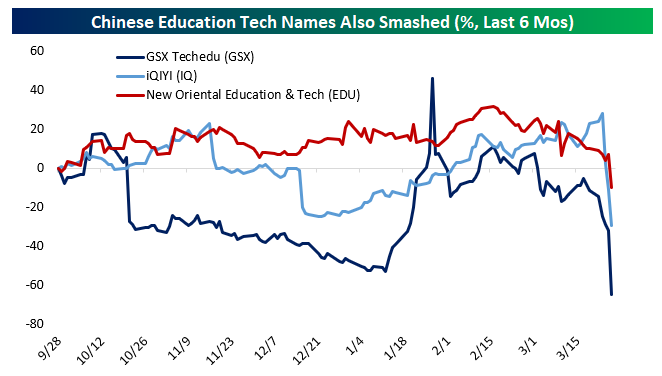