Mean Reversion Seen Around the Globe

Each Wednesday, we publish our Global Macro Dashboard which provides a high-level summary of economic and market indicators of 23 of the world’s largest economies.  Included in this report we show the charts of each of these countries’ stock markets and glancing across these charts, the US has not been alone in falling back below its 50-DMA.  In the chart below, we show the average distance to the 50-DMA of these 23 countries.  At the start of the summer, the global average 50-DMA spread was at the highest levels of the past five years after hitting multi-year lows just months earlier, but through the summer that reading gradually moderated.  With weakness in equities around the globe since the start of the month, the average global stock market was 2.43% below its 50-DMA as of yesterday’s close.  That is the lowest reading since April. In other words, equity markets around the globe have mean reverted just like the US. 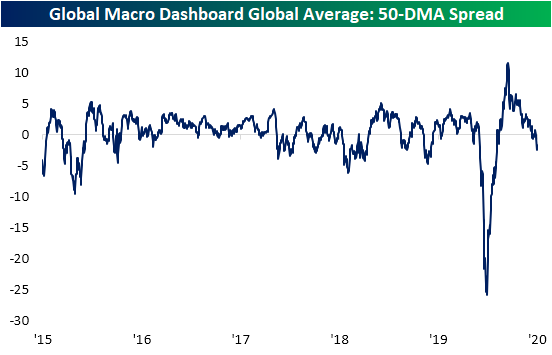 In fact, there are only a small handful of these countries that are currently sitting above their 50-DMAs.  Of these Switzerland, Sweden, and Japan are further above at over 1% while Russia and South Korea are a more modest 0.1% and 0.3% above their 50-DMAs, respectively. For the US, this month’s declines only leave the S&P 500 roughly 1% below its 50-DMA which is actually one of the stronger readings (third highest) among countries that are trading below their averages.  Currently, nine of these countries are more than 2% below their moving averages. 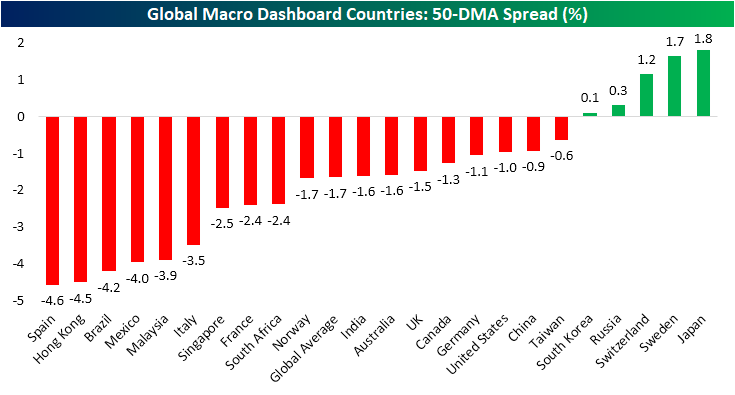 Although major global equity markets are generally together in sitting below their 50-DMAs, the US is coming from a much different place than most other counties. For starters, other than the US, only South Korea and Taiwan reached new 52-week highs in September while South Africa is the only other country to have seen a 52 week high since the beginning of August.

As shown in the table below, prior to the recent mean reversion (at the last high for the S&P on September 2nd), US equities were 9% above their 50-DMA.  That compares to the global average of just 1.4% at the same time.  The country that was the next most extended besides the US was South Korea at +4.8%. Since then, US equities have dropped 7.41%, with the month to date decline at 5.3% which is second only to Hong Kong’s 5.7% drop.  In other words, equities around the globe have experienced mean reversion, but price action in the US has been some of the most dramatic and perhaps most justified. Click here to view Bespoke’s premium membership options for our best research available. 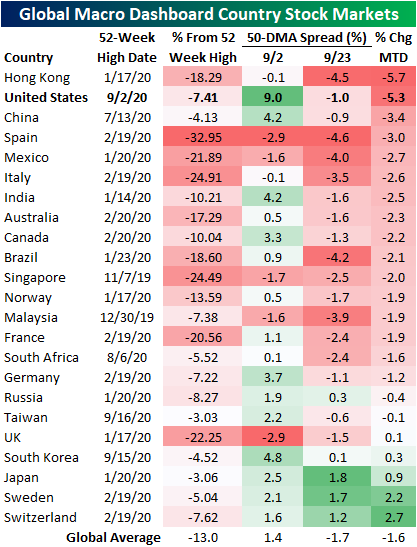