May Manufacturing Starting Off Strong

The first manufacturing data for May came out this morning with the release of the New York Fed’s Empire State Manufacturing Survey.  General business conditions remain at historically strong levels although there was some slowing in May as was expected.  After hitting the highest level since October 2017 last month, it was expected to fall to 23.9 in May.  The index did in fact decline, but only to 24.3.  While lower, that is still around some of the strongest levels (excluding last month) in three years as more businesses continue to report improvements in business conditions than weakness. 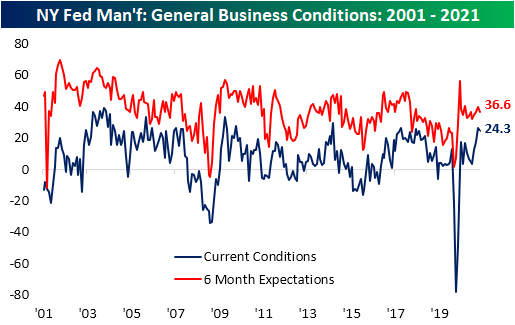 Breadth in this month’s report was pretty mixed; namely with regards to current conditions versus expectations. Every index is still showing an expansionary reading with particular strength out of the indices for the present situation.  In fact, most of those indices still sit in the top decile of their historical range with a few like those for unfilled orders, delivery times, and prices even at or just off of record highs.  But there were a handful that moved lower: delivery times, inventories, and number of employees.

Regarding expectations, it was much harder to find an increase. Delivery times and technology spending were the only two of these indices to rise month over month.  While many indices for expectations still sit at historically strong levels, there are more that are middling within their respective historical ranges. Overall, the report showed that New York area firms have seen a peak in optimism even as they continue to report strong conditions. 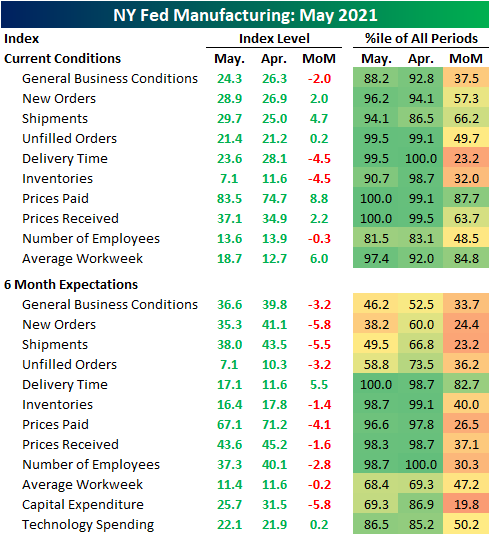 Demand certainly appears to be one area without much in the way of weakness.  New orders rose 2 points month over month to 28.9.  That is the highest level in just over 15 years and the only other readings as high occurred throughout late 2003 to mid-2004.  Those orders are making their way out the door at an increased rate too as shipments climbed to 29.7.  That index has been making a vertical climb since the winter as it reached its highest level since August 2007.

Despite this, NY area firms are not fulfilling orders fast enough.  Last month saw the Unfilled Orders index rise by one of the largest amounts in a single month on record, and it continued to climb albeit by a much smaller 0.2 points in May.  The only month on record with a higher reading in unfilled orders was September 2001. Inventories were one of the few current condition indices to fall in May, although the reading still indicated growth. In other words, those unfilled orders are not necessarily drawing down on inventory levels. 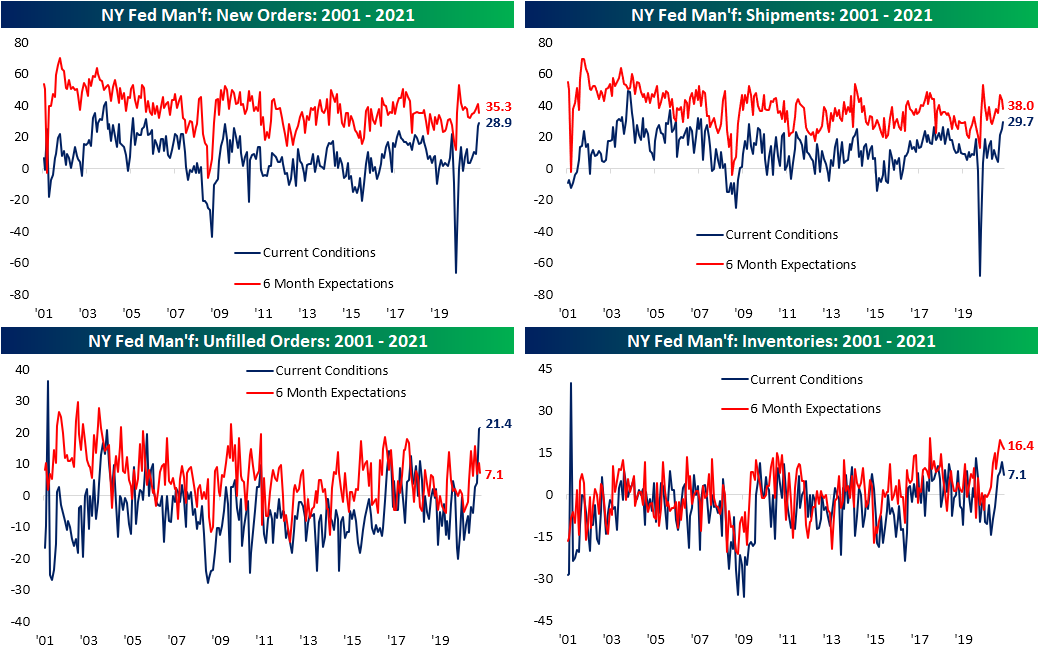 Supply chains are one of the main areas that are likely holding things back. Higher readings in the delivery times index mean that businesses are reporting that it takes longer for products to reach their destination.  Even after falling 4.5 points in May off of the April record, the current level sits well above the prior record high of 16.2 from March 2018. 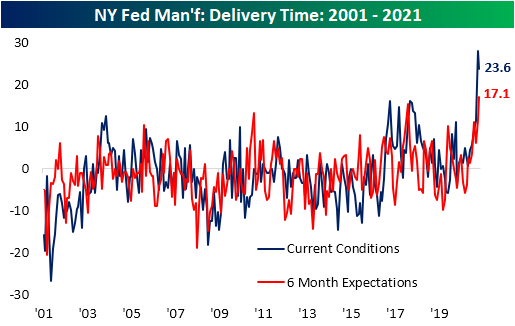 In addition to taking longer for products to get to where they are going, the price point is on the rise.  Both indices for prices paid and received rose to record highs in May. In fact, over the past two months, there has not been a single respondent to have reported a decrease in prices paid.  That is the first time that has occurred since February and March 2012. 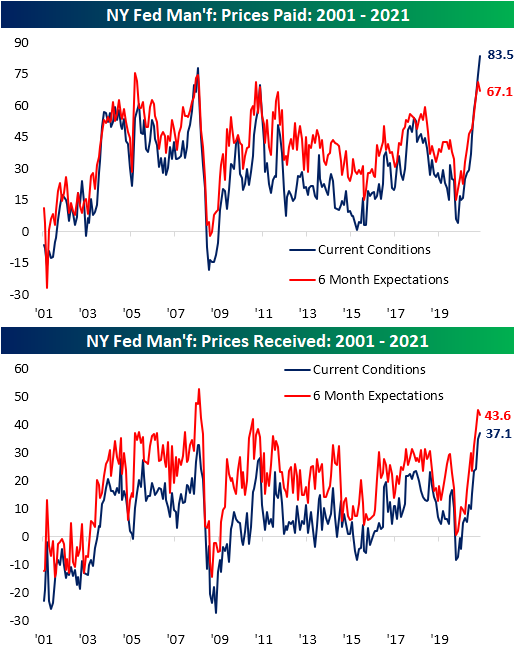 Last week saw a blockbuster job openings report and the Empire Fed survey is showing a similar willingness to take on more workers.  The current conditions index for the number of employees continues to show that businesses are on net increasing their workforce, though at a slowed pace from April. Additionally, the index is at a much less elevated part of its range (the 81st percentile) relative to other indices within the report, but the much more elevated reading in expectations (98th percentile) would indicate the businesses would like to take on far more workers. That is, there appears to be a bit of a disconnect between the actual number of new hires and businesses’ expectations to take on more workers.  Potentially as a result of an inability to hire enough workers, the average workweek has continued to climb.  At 18.7, the index is at its highest level in a decade. Click here to view Bespoke’s premium membership options for our best research available. 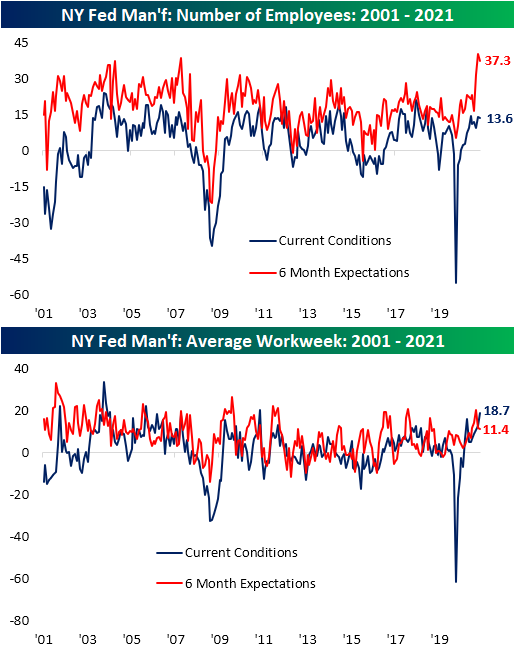