While the S&P 500 finished last week slightly lower, the general theme across each of the eleven sectors was mean reversion.  As shown in the snapshot of our Trend Analyzer below, the best performing sectors were those that are coming from oversold territory or below their 50-DMAs: Materials (XLB), Energy (XLE), and Financials (XLF). XLB was the top performer of these with its 2.8% gain resulting in it exiting oversold territory, and Friday’s close saw the sector finish above its 50-DMA for the first time since June 14th.  Conversely, some of the sectors that have recently been at more overbought levels like Consumer Discretionary (XLY) and Communication Services (XLC) were the worst-performing sectors.  XLY came back within one standard deviation of its 50-DMA on that move.

Over the past few weeks in our Sector Snapshot, we have noted the consistent oversold readings that the Materials sector has seen, but as noted above, the strong run recently has brought it back not only within a standard deviation of its 50-DMA but above its 50-DMA for the first time in a month and a half. Additionally, it hasn’t been just the last five trading days.  Friday’s higher close extended the sector’s winning streak to nine days long.  As of this morning, the sector is again higher and looking to extend its streak to double digits. If the Materials sector keeps alive its winning streak, it would be the first double-digit winning streak since an 11-day long streak for Consumer Discretionary ending on July 6.  As shown in the second chart below, for the Materials sector that would be the first 10-day winning streak since last June and before that, you would need to go back to the end of 2013 for a streak as long. While still uncommon, there is also some historical precedence for other nine-day-long streaks scattered throughout the past few decades. 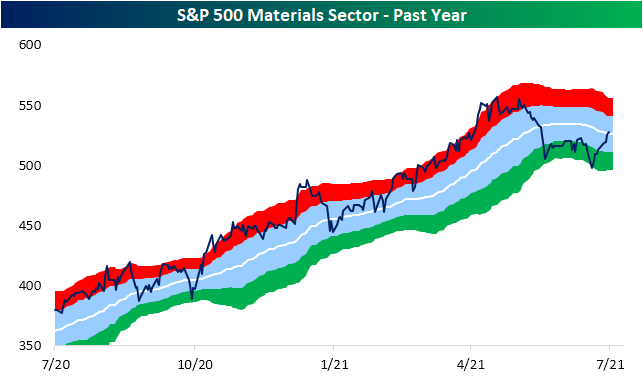 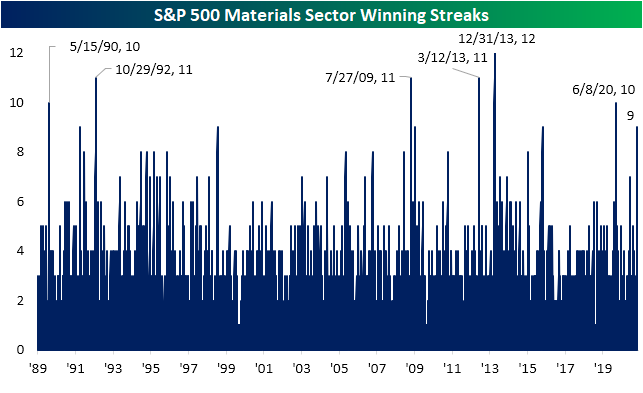 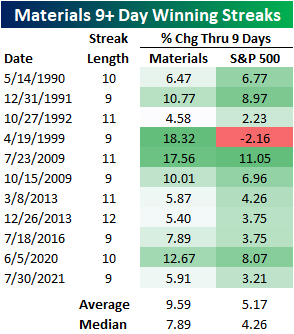