In yesterday’s B.I.G. Tip report, we showed a decile analysis of performance in the month of November based upon a range of metrics.  One of the most notable themes was performance based on market cap.  Whereas for most of this year the stocks with the largest market caps have outperformed, the opposite was true in November.  If the small-cap Russell 2000’s return to new all-time highs wasn’t indication enough, the decile of Russell 1000 stocks with the smallest market caps rose an average of 28.5% in November.  That is head and shoulders better than the next decile (the 9th) in which the average stock rose 17.09%. As you move up the ladder in terms of market cap, performance worsened with the largest stocks seeing some of the worst performance on the month.  The first decile saw an average gain of 12.39%. That group includes stocks with market caps above $100 billion including the trillion-dollar club: Apple (AAPL), Microsoft (MSFT), Amazon (AMZN), and Google (GOOG). 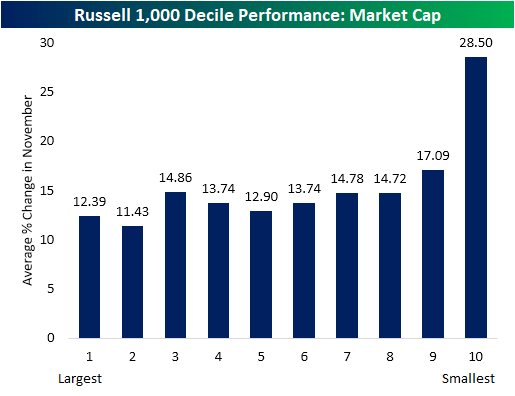 Again, some of the stocks with the largest market caps have also been the ones that have risen the most this year.  Given this, the stocks that were up the most on a year-to-date basis through the end of October were also the ones that underperformed the most in November and vice versa. As shown below, the decile of stocks that have been the top performers from the start of the year through October averaged a gain of 12% in November. The second decile averaged an even smaller 9.35% rally. On the other end of the spectrum, November saw heavy rotation into the stocks that had been most beaten up this year.  The decile of the worst performers averaged a substantial 38.08% rally in November.  Deciles 8 and 9 similarly saw big rallies of 16.05% and 21.45%, respectively. These deciles included a lot of reopening stocks like airlines, energy, travel, regional banks, and brick and mortar heavy retail. Click here to view Bespoke’s premium membership options for our best research available. 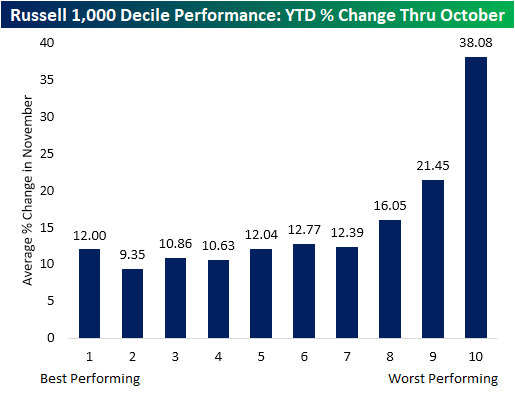