As technological improvements have scaled over time, there isn’t a day that goes by where we don’t see or hear about the growing problem of inequality in society.  Just as technology has created an issue of haves and have-nots among individuals, it has also become increasingly evident in the stock market as well.

The chart below compares the market cap of all the companies in the small-cap Russell 2000 to the combined market cap of Apple (AAPL) and Microsoft (MSFT), the two largest US companies.  Two years ago, the Russell 2000’s market cap was over a trillion more than the market cap of AAPL and MSFT.  In the span of 24 months, though, the gap between the two has narrowed significantly to its current level of $114 billion, or about one PayPal (PYPL).  Less than two weeks ago, the gap between the two was less than $65 billion, or roughly one Estee Lauder (EL)!

Even when we’re talking trillions, $114 billion isn’t that small of a number, and it would still take roughly a 10% gain in either Apple or Microsoft or some combination of the two (or a decline in the Russell 2000) in order  to close the gap.  That being said, the gap between the two has narrowed by nearly 90% in just two years.  With Microsoft (MSFT) reporting after the close, a big upside surprise could help to close the gap.  MSFT typically sees a move of just under 4% in reaction to earnings, and the last time it rallied 10% on earnings was four years ago back in October 2015, so it’s extremely unlikely that the gap closes in the coming days, but the fact that the spread is even this close to begin with is pretty amazing.  Start a two-week free trial to Bespoke Premium to sample our most actionable investment research and receive access to all of our interactive tools.  If you use this checkout link, you’ll receive a 10% discount on an annual membership if you stick with it past your trial period. 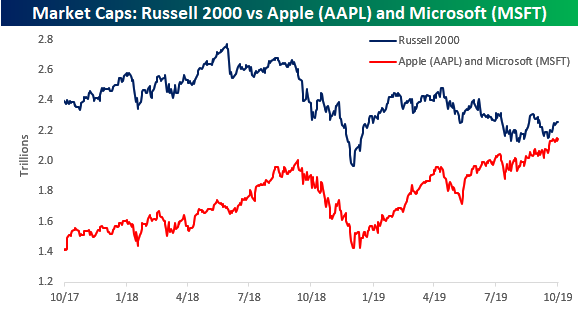