Data on Housing Starts and Building Permits for the month of March came in better than expected on Friday morning. That provided some relief to the concerns that surfaced from February’s weak and weather-impacted report.  With March’s rebound, Housing Starts are now back at their highest levels since 2007.  Building Permits still remain below January’s peak but also managed to rebound.

We pay a lot of attention to trends in residential real estate because it is such a large part of the US economy, and therefore has done a good job tracking trends in the overall economy. The chart below shows the 12-month average of Housing Starts relative to recessions going back to 1967.  Looking at the chart, it’s easy to see how leading up to every prior recession, Housing Starts always started to roll over in advance of the recession.  That didn’t happen leading up to the current recession, but given the suddenness of the contraction, there was really no way to anticipate it. Conversely, coming out of prior contractions, the recession was usually over before the 12-month average started to rebound.  Here again, the current recession re-wrote the script.  Not only did starts never meaningfully rollover, but they are also back at new post-financial crisis peaks.  In the periods leading up to, during, and now after this current recession (even though the NBER hasn’t officially called, the COVID recession is over), the patterns of Housing Starts looks nothing like the trends we have seen in prior periods. 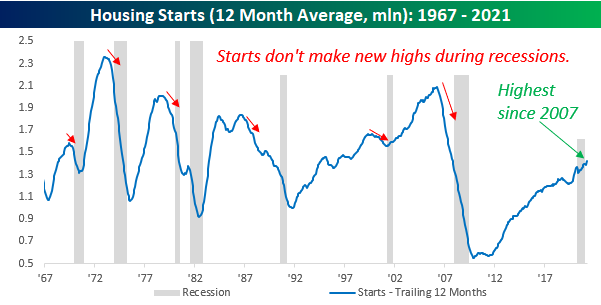 Taking a closer look at the current period, the chart below shows the 12-month average for Housing Starts and Building Permits going back to 2010.  While Permits weren’t as strong as Starts in March, their 12-month average is actually considerably higher as both series climbed to new post-housing bubble highs. 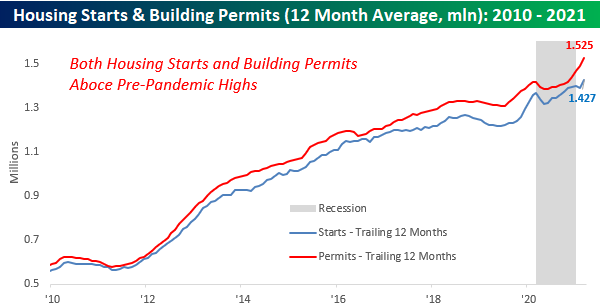 Within both the Housing Starts and Building Permits data, we have also broken out the trends in single-family units.  In terms of their economic impact, single-family units are thought to have more of an economic impact than a multi-family unit.  Here again, the current trend remains positive as both series reached their highest levels of the post-financial crisis period in March. Click here to view Bespoke’s premium membership options for our best research available. 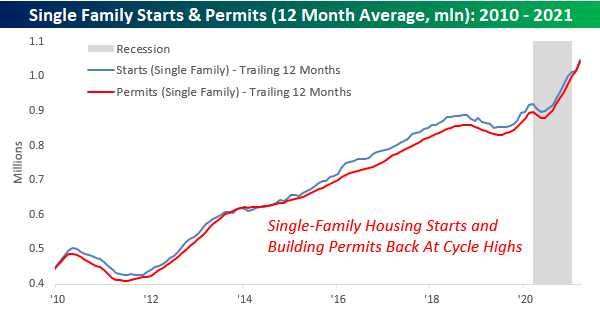