What’s the bright side to the market weakness from news overnight that a US drone strike in Iraq killed Iranian General Qassim Soleimani?  It took all the focus off of the December ISM Manufacturing report which came in weaker than expected and was all around bad just about any way you look at it!  At the headline level, economists were expecting the ISM Manufacturing index to rebound from 48.1 up to 49.0, but instead of a bounce, we actually saw a decline to 47.2, which was the lowest level since June 2009.

Commentary in this month’s report was also weak.  Outside of Textile Mills, where the outlook is positive, commentary around every other sector highlighted was negative with descriptions like shrinking, sluggish, and on the defensive dominating the commentary. 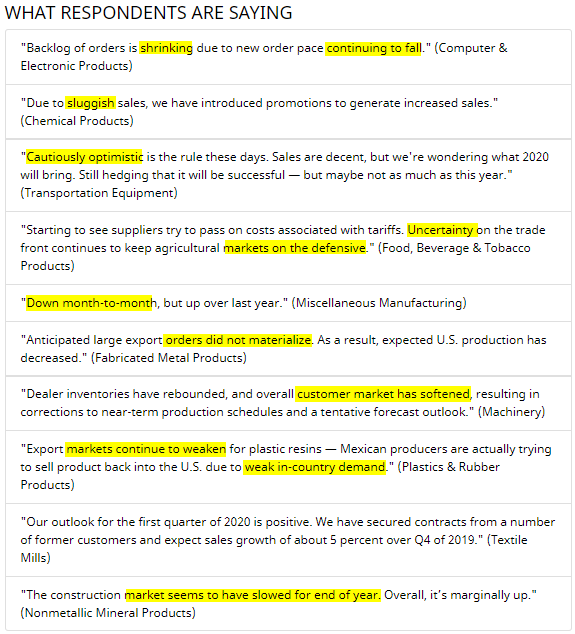 Below we break down this month’s report by each of the individual sub-indices.  The biggest decliners relative to November were Production and Employment while Prices Paid saw the largest decline.  Weak activity with rising prices?  That’s not an optimal combination! 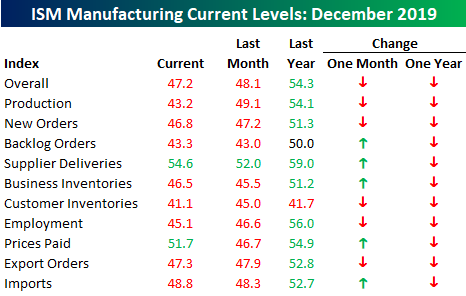 As mentioned above, Production saw the largest decline in December, falling to 43.2 from 49.1.  That’s the largest m/m decline since January 2012 and the lowest overall reading since April 2009.

New Orders were also weak this month, and while the m/m decline wasn’t large (less than a point), activity hasn’t been shrinking at this rate since April 2009.

On the employment front, activity also contracted from 46.6 down to 45.1.  Employment in the manufacturing sector hasn’t been this weak since January 2016.

As if the weak activity in the Manufacturing sector wasn’t bad enough, it was accompanied by rising prices.  As shown in the chart below, the Prices Paid component increased five full points to 51.7 in what was the largest m/m increase in over two years (September 2017).  All in all, this was just a lousy report!  Start a two-week free trial to Bespoke Institutional to access our quarterly Equity Market Pros and Cons report, economic calendar, and all of our other research tools.