Breadth in this month’s report was also weak. Of the report’s ten subcomponents, six declined on a m/m basis while four increased, but all but one are still in contraction territory for the fourth straight month, which is a trend we haven’t seen since late 2008/early 2009.  The biggest increases this month were in Imports and Production, while Inventories showed the largest declines.  Looking at the changes in each component relative to last year at this time, though, shows how quickly conditions have changed as all but one (Customer Inventories) are down on a y/y basis. 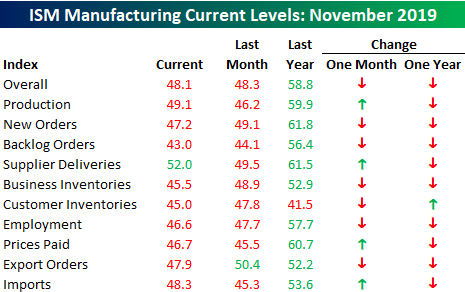 Two charts we wanted to highlight individually are Employment and Prices Paid.  In the case of Employment, that component dropped to 46.6, which is still modestly above the recent low of 46.3 in September.  Even still, this doesn’t bode particularly well for Friday’s employment report.  More important to watch, though, will be the ISM Services report on Wednesday.

Similar to Employment, Prices Paid also turned back lower this month and is right near its recent lows.  This indicator serves as a reminder that inflation readings are still showing no signs of accelerating to the upside.  That coupled with the fact that the Fed has suggested on multiple occasions that it is willing to remain on hold until well after inflation rates reach or exceed their target levels indicates that any rate hikes by the FOMC are a way off.  Sign up for Bespoke’s “2020” special and get our upcoming Bespoke Report 2020 Market Outlook and Investor Toolkit.