Both Markit and ISM’s readings on the manufacturing sector exceeded expectations this morning indicating that the sector of the economy continued to grow at an accelerated pace in October.  In regards to the ISM report, the headline number rose to 59.3 after falling to 55.4 last month.  The index is now at its highest level since September of 2018.

Commentary from respondents is backing up the strong showing of the headline number. The bulk of comments made mention that demand has continued to improve with some companies saying that conditions are almost back to or even better than pre-COVID levels.

Looking across the various categories of the report, breadth was very strong with all but one index rising month over month. That index that moved lower was for Customer Inventories which has fallen deeper into contraction.  On the other hand, the indices for Business Inventories and Employment exited contractionary territory with significant increases this month; both MoM increases around the top 10% of readings. Elsewhere in the report, demand is very strong with New Orders, Backlog Orders, and Export Orders all heading higher. Meanwhile, as businesses ramp up production to meet that demand, Imports, Production, and Employment also improved. That has also led prices to rise while supply chains still are showing some signs of stress as lead times remain elevated as seen through the Supplier Deliveries index.

As noted in the comments section, many businesses have reported that demand has been very healthy. The index for New Orders is consistent with this. After pulling back in September, the index rose past the August high of 67.6 in October. At 67.9, the New Orders index is at its highest level since late 2003/early 2004 and the 7.7 point month over month increase was in the top 5% of all monthly moves. As new orders expand at a rapid pace, backlogs have been on the rise as well. The index of Backlog Orders rose to 55.7 from 55.2; the highest level in two years.

That strong demand has been taking its toll on inventories over the past few months. After three straight months of contraction in inventories, October saw inventories expand for the first time as the index rose to 51.9 from 47.1 in September.  That is the highest level since April of last year. The improvement in business inventories indicates some normalization for supply chains that are seeking to match historically strong demand.

Meanwhile, the index for Customer Inventories, which tracks whether inventories are too high, too low, or just right, fell to 36.7 in October versus 37.9 in September.  At its lowest level in a little more than a decade, around a third of respondents are reporting that customer inventories are still too low. In other words, inventories are finally beginning to build but still have a ways to go to meet demand.

Taking the spread of New Orders and Customer Inventories, there have only been two other months in the past two decades (December of 2003 and December of 2009) in which the spread was higher. That means that new orders continue to rise much faster than inventory levels which will be a tailwind for production in the future. 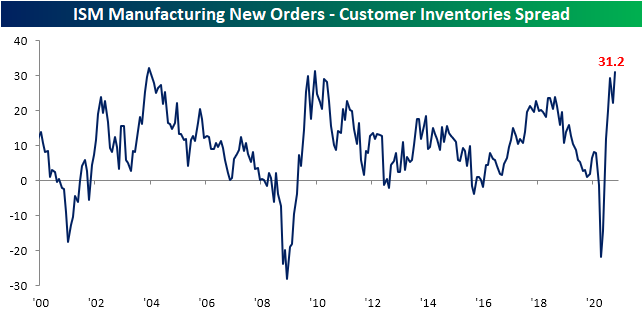 One of the most promising areas of the October report was that for the first time since July of 2019, the index for Employment rose above 50, meaning there was finally net hiring. That rise in employment is surely on account of rising production to meet the surging demand. Click here to view Bespoke’s premium membership options for our best research available.