This morning, the Institute for Supply Management (ISM) released a less positive outlook for the US manufacturing sector.  The headline number for ISM’s Manufacturing index fell from 59.3 last month down to 57.5. A drop was expected, but the actual results were worse than the drop to 58.0 that had been forecasted. That reading indicates that the manufacturing sector continued to grow in November but at a slower rate than October.

Similar to the various Federal Reserve bank surveys from around the country, breadth in the November report was more negative than in recent months.  Of the ten indices excluding the headline number, only three were higher in November: Backlog Orders, Supplier Deliveries, and Export Orders.  Additionally, two indices—Customer Inventories and Employment—showed contractionary readings.

One theme of the report was that orders remain very healthy.  New Orders fell from 67.9 to 65.1, but that is a sixth consecutive month of expansionary readings.  Although the index was lower this month, meaning new order growth decelerated, it remains in the top decile of historical readings. As new orders have continued to grow, so too have backlogs. The index for Backlog Orders has continued to press higher, rising to 56.9 from 55.7. That is in the 88th percentile of all months and is now at the highest level since August of 2018.  Demand continues to improve with new orders coming in at a historically strong pace, even though it is slower than last month, and order backlogs have once again risen as a result. 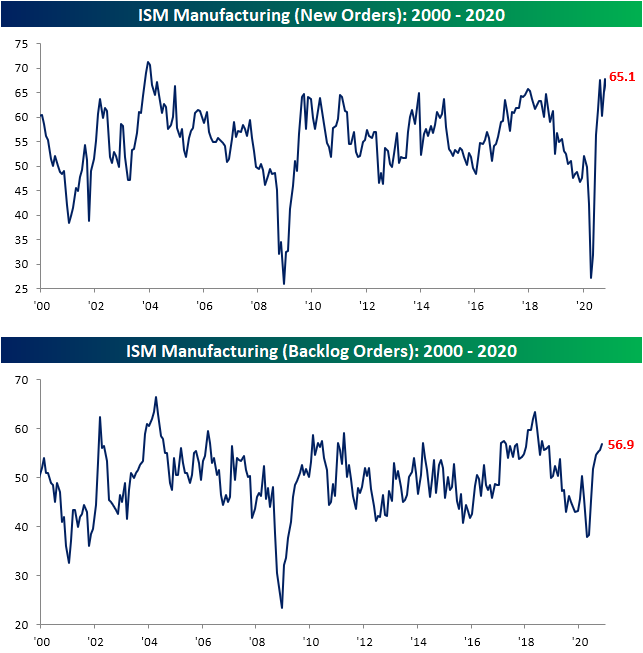 As new order growth decelerated, so too did production.  The index fell from 63.0 in October to 60.8 last month.  That is still consistent with growth (readings above 50) in production but at the slowest rate since June.  One factor that potentially had an impact on the slowdown in production is issues with suppliers.  The index for Supplier Deliveries rose for the fourth month in a row in November and reached the highest level since May.  Higher readings in the Supplier Deliveries index indicates longer lead times and vice versa.  In other words, products from suppliers have been taking longer to reach manufacturers, in turn, impacting productivity. 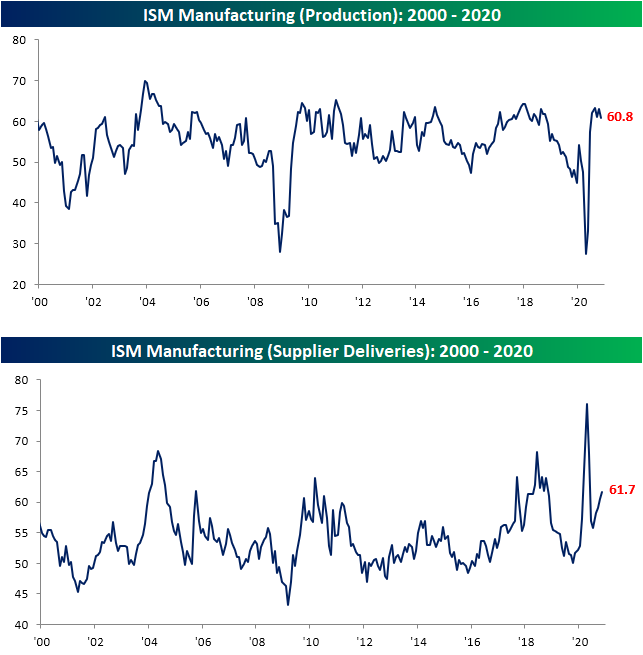 Although suppliers appear to have some constraints and production has slowed slightly, business inventories rose for the second month in a row even as more and more firms report that customer inventories are too low.  The index for Customer Inventories now sits in the bottom 2% of historical readings after dropping another 0.4 points in November. At 36.3, the index is at the lowest level since June of 2010.  That low reading can be considered positive for future production. Click here to view Bespoke’s premium membership options for our best research available. 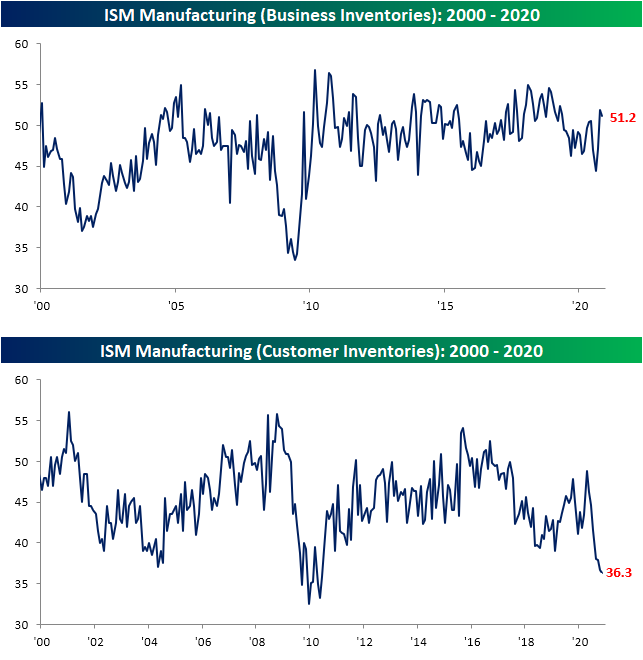