MAGA Out of Favor

With the flare-up of protests in China sparking concerns about production disruptions at Foxconn factories, shares of Apple (AAPL) are once again down 20% from their all-time closing high.  With that move, all four of the mega-cap ‘MAGA’ stocks – Microsoft (MSFT), AAPL, Alphabet aka Google (GOOGL), and Amazon.com (AMZN) – are now down at least 20% from their all-time closing highs.  Along with AAPL’s 22% drawdown, the three others have seen declines in excess of 30% with AMZN down over 50% from its record high. 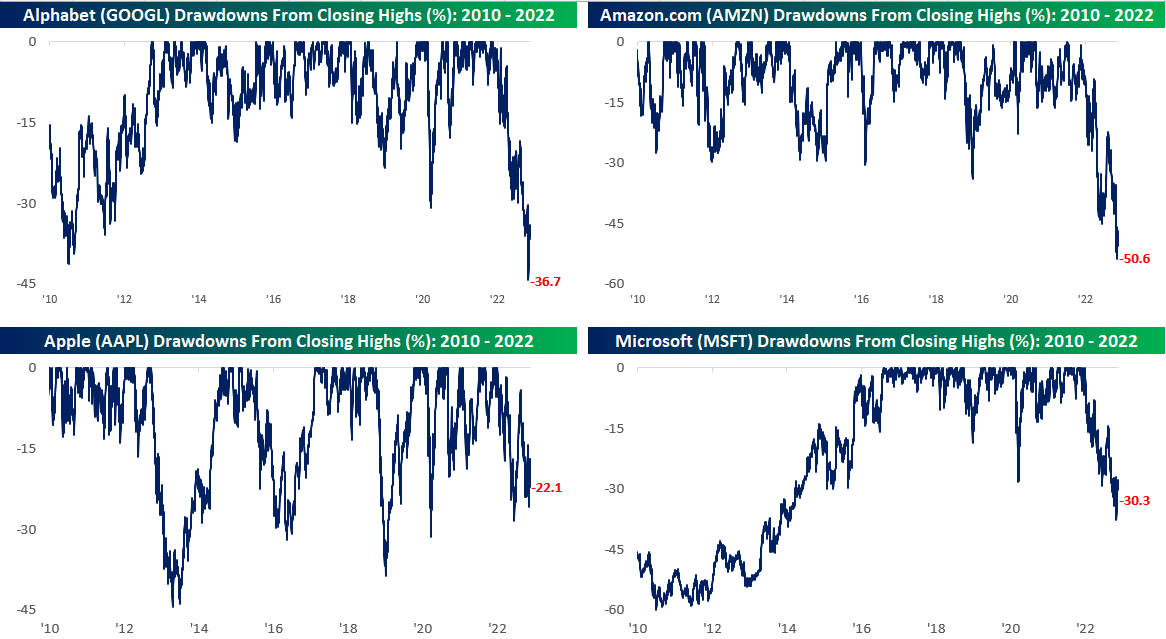 While all four of the largest stocks in the S&P 500 are down at least 20% from their highs, it’s quite a juxtaposition with the S&P 500 which is down ‘only’ 17.8%.  Before yesterday, the only time since 2010 that all four MAGA stocks were down at least 20% and the S&P 500 was down less than 20% was in a six-week period from mid-May to late June (shaded area in chart).  For years, mega-caps were credited with driving the broader market gains as they handily outperformed their smaller market-cap peers.  In 2022, we have seen the opposite trend play out as mega caps are still seeing larger moves, but to the downside instead of to the upside.  Look on the bright side, think about how much worse the picture would look if smaller stocks in the S&P 500 were still underperforming their mega-cap peers. Click here to learn more about Bespoke’s premium stock market research service.