Coronavirus fears have broadly sent rates lower over the past month. Currently, the national average for a 30-year fixed-rate mortgage stands at 3.68%; just off the low of 3.55% from earlier in the month.  With mortgage rates now basically at their lowest levels since late 2016, homeowners have been quickly enticed to jump on these lower rates. 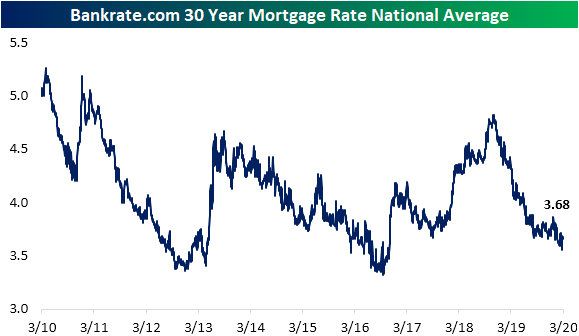 Last week, weekly mortgage applications from the Mortgage Bankers Association showed a roughly 15% surge as rates were reaching record lows.  In the time since then, the Fed’s 50 bps cut came into effect and yields fell even further which led mortgage applications this week to surge 55.4%.  That is the highest week over week increase in mortgage applications since November of 2008 when they had risen 112.1%.  Outside of that period, we’ve only seen larger weekly increases a few other times since 1990. 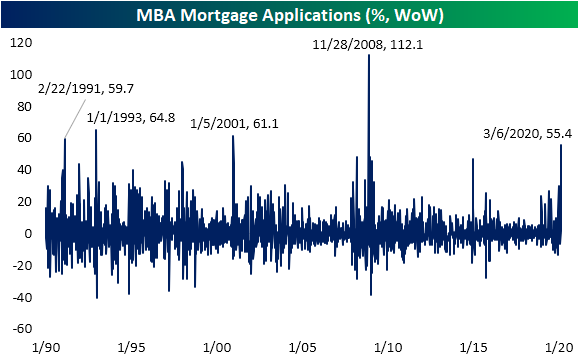 The spike was driven largely by refinancing applications which rose 78.6% week-over-week.  As with the composite, that was the biggest weekly jump in refi applications since the housing bubble. Prior to that, once again you would need to go back to 2001 or the 1990s to find larger weekly increases in mortgage refinance applications.  Start a two-week free trial to Bespoke Institutional to access our interactive economic indicators monitor and much more. 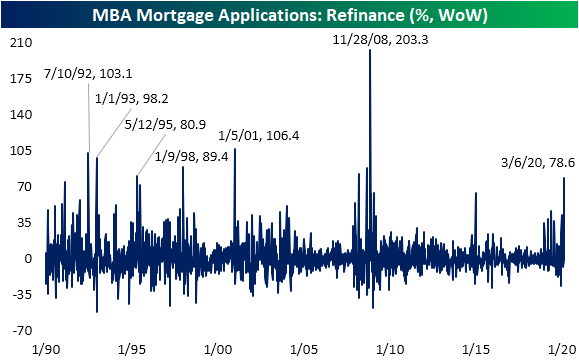