Love For The Taper

In today’s Chart of the Day, we provided a rundown of the S&P 500’s historical intraday pattern on Fed days.  Now that the trading day has come and gone, we have added today’s price action into the mix as well.

Below is a look at the average path that the S&P 500 has taken on Fed days since 1994 when the Fed first began announcing its policy decisions on the same day as its meeting.

For the entire data set of Fed days since 1994 (dark blue line), the S&P has historically trended higher throughout the day with only a small dip in the immediate aftermath of the 2 PM ET announcement.

Since Powell became Fed chair in early 2018, the intraday action has been quite a bit different (red line).  Especially early on in Powell’s tenure, the S&P had a pattern of posting solid intraday gains prior to the 2 PM announcement but then trading sharply lower during the Fed press conference into the 4 PM ET close.

The opposite pattern emerged today.  Instead of trading higher heading into the 2 PM announcement, the S&P was in the red all day leading up to the Fed release.  At 2 PM when the Fed statement came out (including the official announcement of tapering asset purchases), the S&P got an initial jolt and traded into positive territory.  Then when Powell’s presser began, the S&P saw another intraday jump and then it continued to rally into the close.  Had Powell known that the taper would cause this type of reaction, maybe he would have done it sooner!  Click here to view Bespoke’s premium membership options. 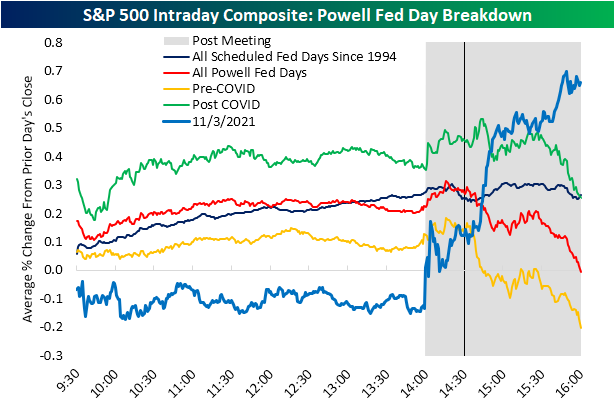