Today is one of the busiest days of earnings season, and with these reports, we have also gotten a massive number of earnings triple plays over the past 24 hours. Since last night’s close, 22 companies have reported better than expected sales and EPS while also raising guidance. For reference, heading into today there were a total of only 35 triple plays this entire earnings season!

Charles River Associates (CRAI), a consulting firm, is up the most since last night’s close having risen more than 20%. Other stocks that have risen double-digits include Universal Display (OLED), ManTech (MANT), Ultra Clean Holdings (UCTT), and Teledoc (TDOC). Of all these triple plays, Inovalon (INOV) saw the largest gap up at the open, rising 13.94%. Despite that gap up, INOV has fallen since the open. On the other hand, only three companies, Generac (GNRC), YETI (YETI), and ACADIA Pharma (ACAD) gapped down today. While overall performance so far for this group of stocks has been strong with an average gain of over 4.7%, intraday performance has been somewhat weak. Just under half of them have sold off since the open. The worst of these is recent IPO Lyft (LYFT) which, as of this writing, has fallen almost 7% since the open, erasing all of its gap higher. Cigna (CI), Masimo (MASI) and FormFactor (FORM) have also more than erased this morning’s gap higher.

Using data from our Earnings Explorer, other stocks that have reported triple plays this earnings season have risen an average of 0.83% from open to close and have averaged a full-day gain of 4.86%.  Looking at all triple plays throughout history since our data begins in 2001, those averages are 0.26% and 5.4%, respectively.  In other words, this season’s triple plays including today have been doing better than average on an intraday basis, but have been slightly weaker in regards to the full-day stock price reaction. Start a two-week free trial to Bespoke Institutional to access our interactive Earnings Explorer and much more. 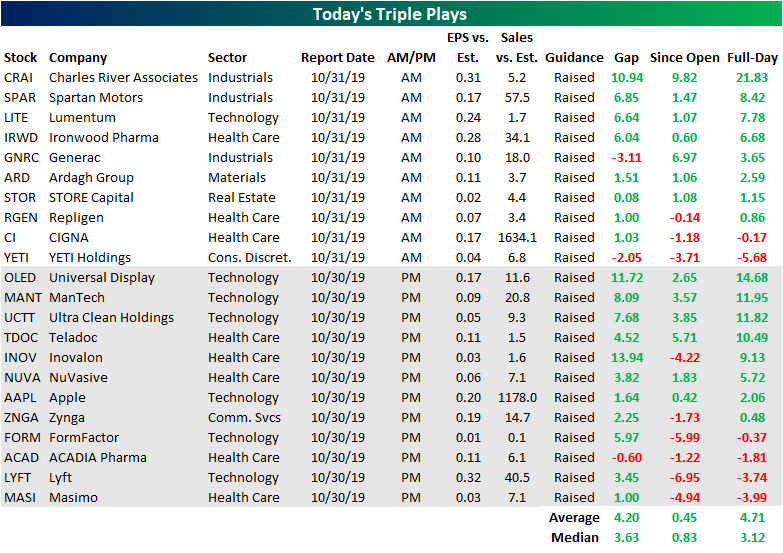