Leveraged ETFs tend to do best in tracking their underlying asset during trending markets as opposed to choppy periods, and with 2019 being a year where the market has, for the most part, traded steadily higher, these leveraged ETFs have performed very well and in many cases lived up to their descriptions.  Equities have already performed well this year with the S&P 500 (SPY) having rallied over 27% year-to-date as of yesterday’s close, and that is off of the November 27th highs just a hair under 28%. The UltraPro S&P 500 ETF (UPRO), which is a 3x leveraged ETF, has actually risen 85.6%, which is more than three times the performance of the S&P 500. 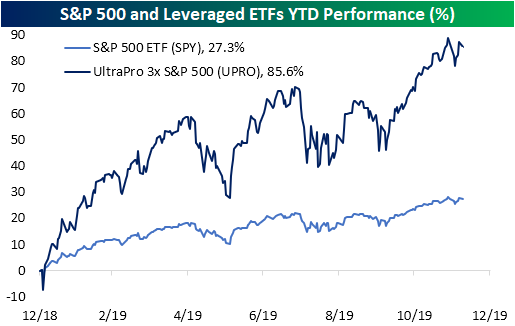 Similarly, the 3x leveraged ETF tracking the Nasdaq 100 – UltraPro QQQ (TQQQ) – has more than doubled so far in 2019!  That is also slightly more than three times the performance of the Nasdaq 100 ETF (QQQ). 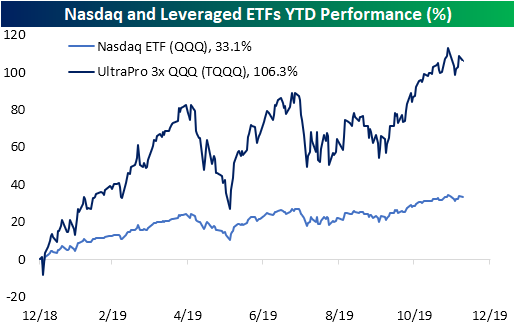 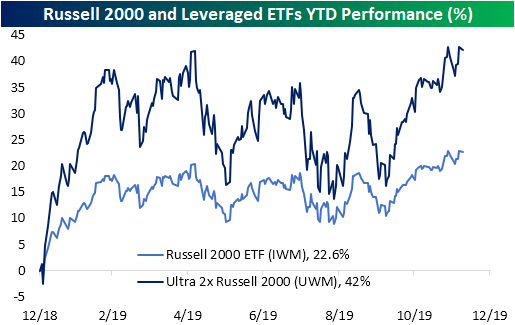 In the Treasuries space, the 2x 20+ Year Treasury ETF has also pretty much doubled the return of the underlying ETF it tracks at 29% vs 15.9%. 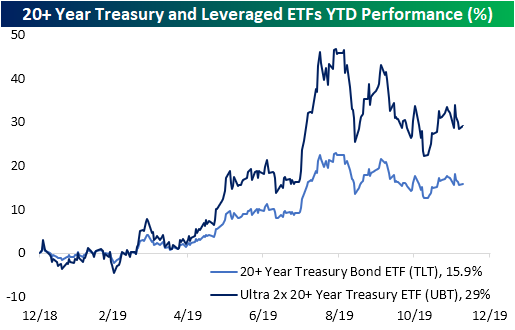 In the commodities space, USO, which is meant to track the price of oil, has risen just under 28%, but the 2x Crude ETF – Ultra Bloomberg Crude Oil (UCO) – which seeks to provide double the daily return of WTI futures – has only returned 1.5 times the return of USO and only 1.4 times the return of the underlying index it is meant to track.  Again, UCO and other leveraged products are designed for shorter holding periods (one day in UCO’s case), so factors such as compounding can lead to long-run returns varying from the underlying index. 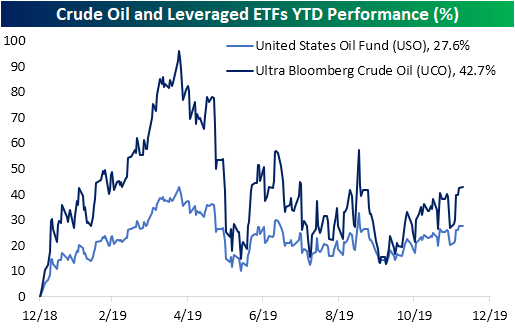 Additionally, while levered ETFs really juice upside returns on the way up, the opposite also holds true.  An investment in the natural gas ETF (UNG) at the start of the year would have been a notable pain trade with a 30% decline YTD.  With losses like that, it has been an absolutely brutal year for the triple-levered long natural gas ETF (UGAZ).  The only silver lining, if you can call it that, is that while the ETF ‘should’ be down 90%, it’s down ‘only’ 79.6%.  Start a two-week free trial to Bespoke Institutional to access our interactive Chart Scanner and Trend Analyzer tracking these ETFs and much more. 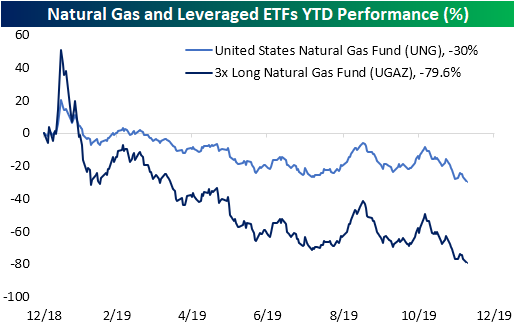