As for other cons working against the potential for higher returns is that these ETFs could create larger losses, they carry higher fees and expenses, and there is the possibility for those 3x or 2x returns to be downgraded as was the case last year. In other words, with the potential for higher returns, there are plenty of other risks, and these ETFs should be addressed with caution. As always, this is in no way to be taken as a buy or sell recommendation for any leveraged ETF product.

In the charts below, we show the hypothetical performance of $100 invested in a handful of leveraged ETFs as well as a more vanilla unleveraged alternative at the start of the year through Monday’s close.  We would also note it is purely price returns before any payouts and/or expenses.

Starting with a look at long-term Treasuries, $100 invested at the start of the year into the iShares 20+ Year Bond ETF (TLT) would be slightly in the red headed into the final quarter of the year. Meanwhile, someone betting on the Direxion Daily 20+ Year Treasury 3x Bull ETF (TMF) would see their $100 fall to $83.24 today.  At the low on March 18th, that $100 would have fallen as low as $60. That’s right, a 40% decile for something tracking what is supposed to be a relatively risk-free asset!

As for some other assets, the Energy sector (XLE) and Financial sector (XLF) have been two of the best performing sectors this year.  As such, $100 invested into XLE and XLF would have grown to $129.79 and $128.69, respectively.  For Energy, the 2x bullish ETF (ERX) would have seen that same $100 turn into $160.78 and the opposite side of that trade (ERY) would see the $100 more than cut in half. The same goes for the 3x bet for Financials.  The Direxion Daily Financial Bull 3x Shares ETF (FAS) has nearly doubled YTD in 2021 whereas the inverse bearish ETF (FAZ) would have turned a buck into less than cents. 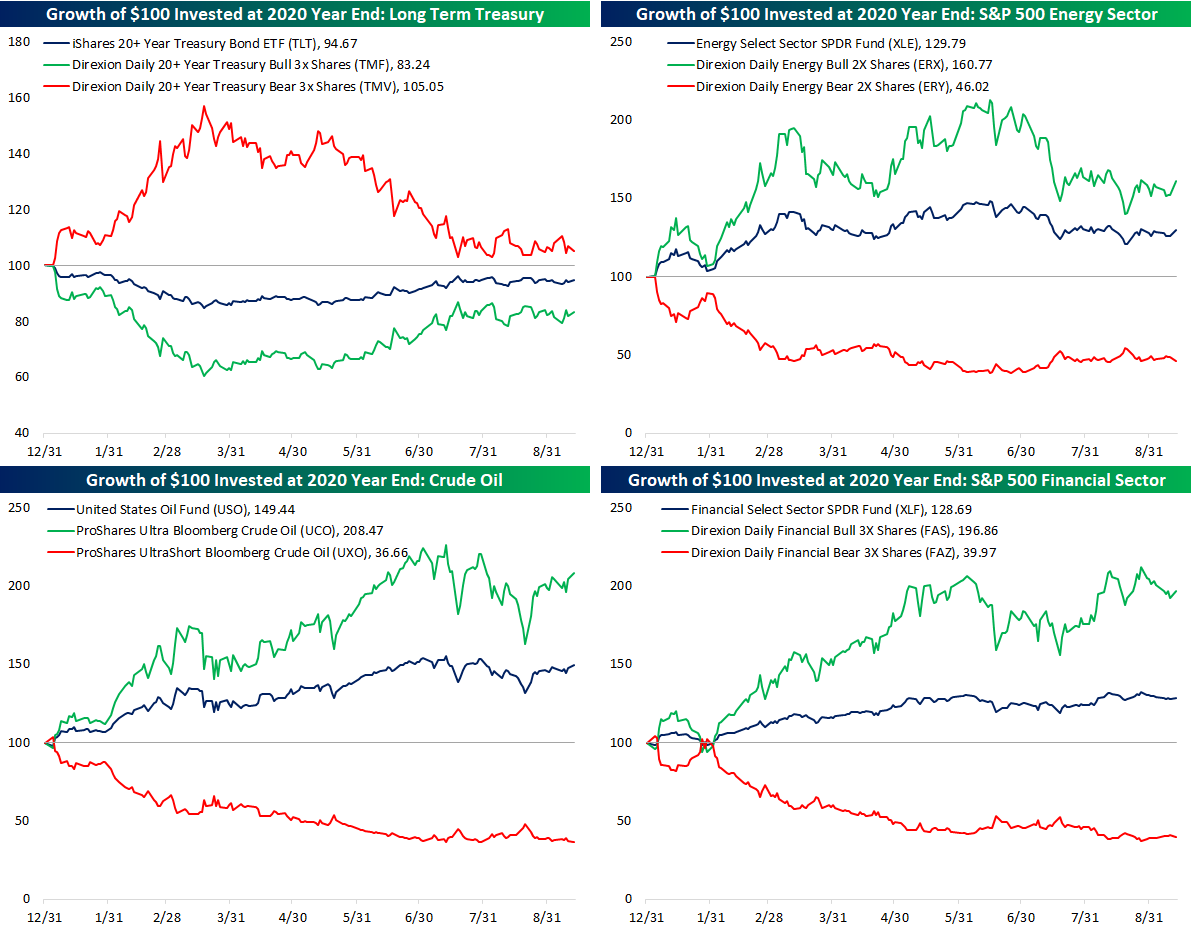 As briefly mentioned earlier, one other con to leveraged ETFs is higher expenses.  For example, taking a look at the S&P 500, $100 invested into the SPDR S&P 500 ETF (SPY) would have become $119.19 year to date before any dividends or expenses.  In the case of SPY, expenses are not much of a burden at only 0.09%. While the Direxion S&P 500 3x Bull ETF (SPXL) would have seen that $100 appreciate to an even more impressive $164.82, returns would have been even better if it were not for a nearly 1% expense ratio.  As for the bears, if the $100 nearly being cut in half isn’t bad enough, adding insult to injury, the expense ratio is above 1%. For comparison, the median expense ratio of a screen of 1,728 ETFs excluding leveraged ones is only 0.49%. Click here to view Bespoke’s premium membership options. 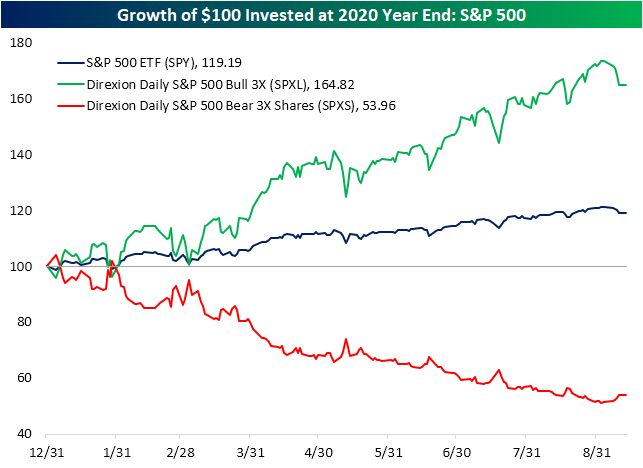