Less Optimistic But Not Pessimistic

As equities have pulled off of their highs, so too has sentiment which has continued to shift more negative in the three weeks since its recent peak of 40.7%. This week marked a third consecutive week with a decline for AAII’s bullish sentiment reading.  Now at 31.72%, it is the lowest level since October 10th when it had fallen to a much lower level of 20.31%. For reference, that was the lowest bullish sentiment reading since May of 2016.  This week also marked the seventeenth week in a row that bullish sentiment has been below its historical average. That is the longest such streak since the one ending at 25 weeks in October of 2017. While bullish sentiment has been restrained, levels haven’t been extreme as we’re still within one standard deviation of the historical average. 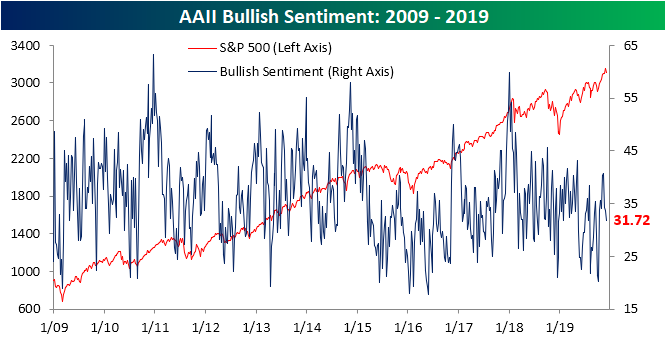 Another survey determining investor optimism, the Investors Intelligence survey also showed a decline in bullish sentiment this week with 54.8% of respondents reporting as bullish. That is down from the 13-month high of 58.1% from last week.  Meanwhile, the survey’s reading on bearish sentiment ticked up to 17.3% and the percentage of respondents looking for a correction rose to 27.9%. Although higher, both of these are only the highest since late October/early November. 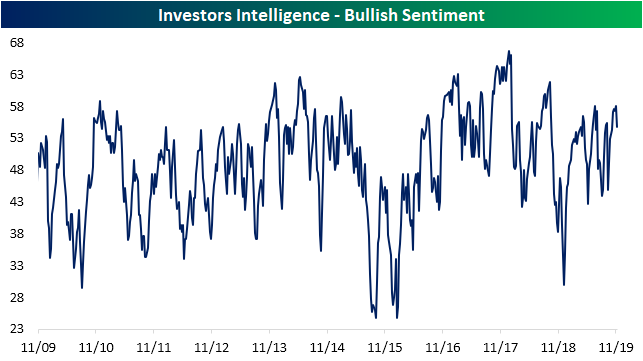 While investors have been less bullish, they are not becoming increasingly bearish either. Unlike the Investors Intelligence survey’s slight increase, the percentage of respondents reporting as bearish in AAII’s survey actually fell this week down to 29.13% from 30.28% the prior week.  That is the first decline after three consecutive increases, brining it right around the historical average of 30.36%. 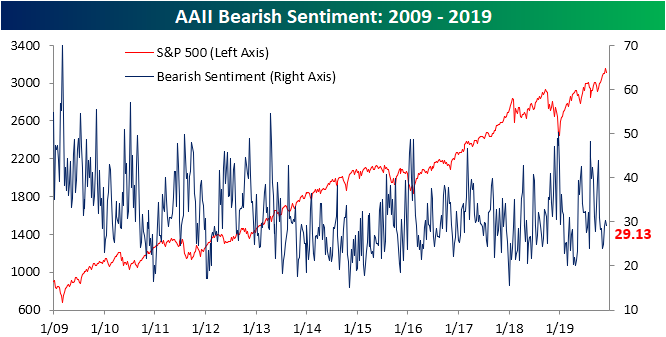 As investors failed to take a bullish or bearish stance, neutral sentiment was the major mover this week rising to 39.16%.  The 3.07 percentage point increase was the largest since mid-September as the indicator is back near the upper end of the past year’s range. Start a two-week free trial to Bespoke Institutional to access our interactive economic indicators monitor and much more. 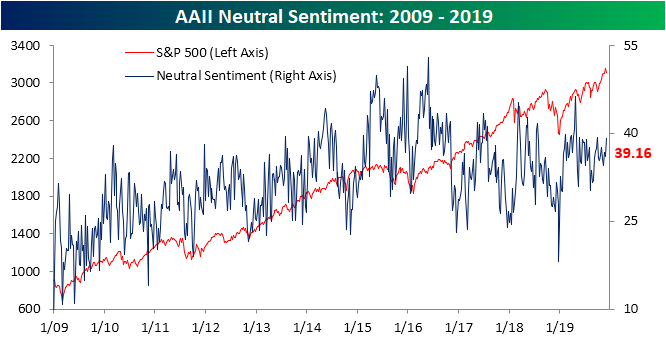