“There are decades where nothing happens and there are weeks where decades happen.”    – Vladimir Lenin

Today marks the 10th anniversary of Tesla’s entry in the public equity market when it opened for trading after pricing its IPO at $17 per share on 6/28/10.  By all accounts, Tesla’s IPO was a success.  The stock rallied 40% on its first day of trading providing a boost for Elon Musk, who had declared only four months earlier that he was broke. In spite of the company’s strong showing in its IPO, then like now, there was a fair amount of skepticism towards the stock.  One analyst questioned whether Tesla would be able to produce more than “a handful of these – if any – in 2012” while others cited looming competition from the Chevy Volt as a threat to the upstart.  With the benefit of hindsight, these concerns were obviously unwarranted.

While Tesla’s stock performance has been a home run since the IPO, it hasn’t been a steady climb higher.  The chart below shows Tesla’s performance since its IPO on a log scale where each horizontal gridline represents a doubling of the stock.  You wouldn’t normally think to take investing advice from Vlad Lenin, but the quote above does a decent job summing up the performance of Tesla’s stock since its IPO.  From the time of its IPO in 2010 through early 2013, Tesla’s stock rallied, but it wasn’t until Spring 2013 where the stock really took off, rising from around $40 to $160 in the span of five months.  Then from there, the stock practically went into hibernation from late 2013 right up until late 2019 when it once again surged from under $320 to over $1,000. In other words, roughly 90% of Tesla’s gains have been confined to 10% of its trading as a public company (gray boxes). There have been years where Tesla’s stock has been dead money, but there are weeks where decades of gains have been achieved. 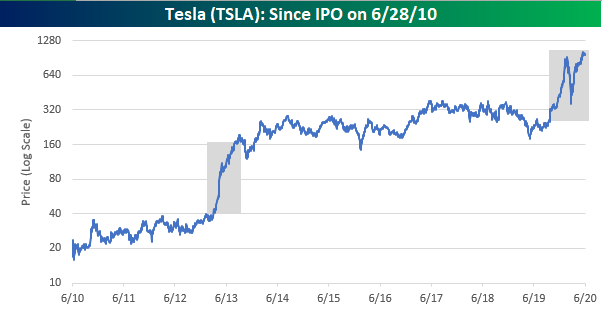 Given it has added two zeros to its share price in the last decade, it should come as no surprise that Tesla has been one of the top-performing stocks in the Russell 3000 since its IPO, but surprisingly it’s not the best. The table below lists the 20 stocks in the Russell 3,000 that have rallied more than 2,000% since Tesla’s IPO priced on 6/28/10. Of these twenty ‘twenty-baggers’, the only one that has outperformed Tesla is Patrick Industries (PATK).  While not nearly as sexy as cutting edge electric vehicles, PATK has marginally outperformed Tesla with steady growth in the production and distribution of building products and materials for the RV, manufactured housing, and marine markets. Behind Tesla, Lending Tree has ‘only’ tacked on 4,033% since Tesla’s IPO, but up until recently, it was ahead before falling more than 35% as Tesla tripled in the last year.

Looking at the other big winners in the last ten years, like Tesla (TSLA), there are a number of names like NVIDIA (NVDA), Domino’s (DPZ), Neflix (NFLX), and Amazon.com (AMZN) that all of us have heard of.  The majority of names, though, most of us have never heard of.  This goes to show that the biggest gains in the stock markets don’t usually come from the names everyone is already talking about, but instead under-the-radar names that operate in the shadows of the ones sucking up all the oxygen. Like Tesla, what a lot of these names have in common is that in most cases the road higher was far from steady.  Instead, it was filled with periods of declines or sideways trading where impatient holders of the stocks likely lost conviction and moved on to the newest flavor of the month.  Like what you see? Click here to view Bespoke’s premium membership options for our best research available. 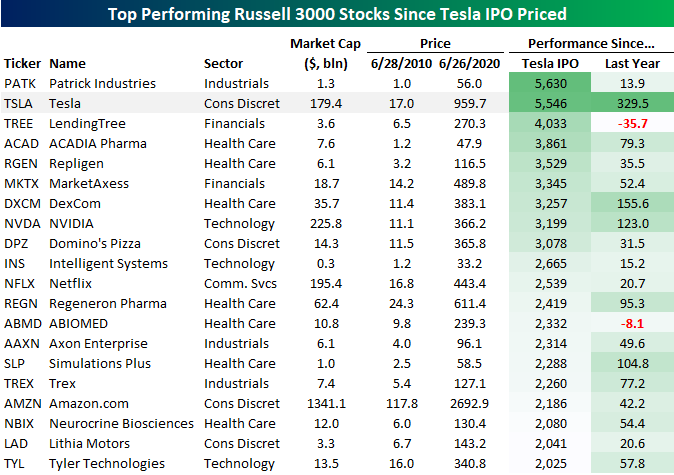