Glancing through the US Groups ETF screen of our Trend Analyzer, by far the best performer over the past week has been the Dynamic Leisure and Entertainment ETF (PEJ).  The portfolio is largely comprised of reopening stocks like restaurants, travel companies, and various forms of entertainment both live and otherwise. PEJ has rallied 11.77% in the five trading days ending yesterday in a move that has moved it deeply into overbought levels as it sits 16.71% above its 50-DMA.  As the next best-performing ETFs in this screen, oil-related names like the S&P Oil and Gas Equipment and Services ETF (XES) and Oil Services ETF (OIH) have both risen well over 7% and are even more extended above their moving averages in percentage terms. As for the other ETFs, the S&P Biotech ETF (XBI) is another top performer and is the only one that is not overbought at the moment. Granted, it has retaken its 50-DMA in the past week, and its longer-term trend is worse than the rest of the screen. 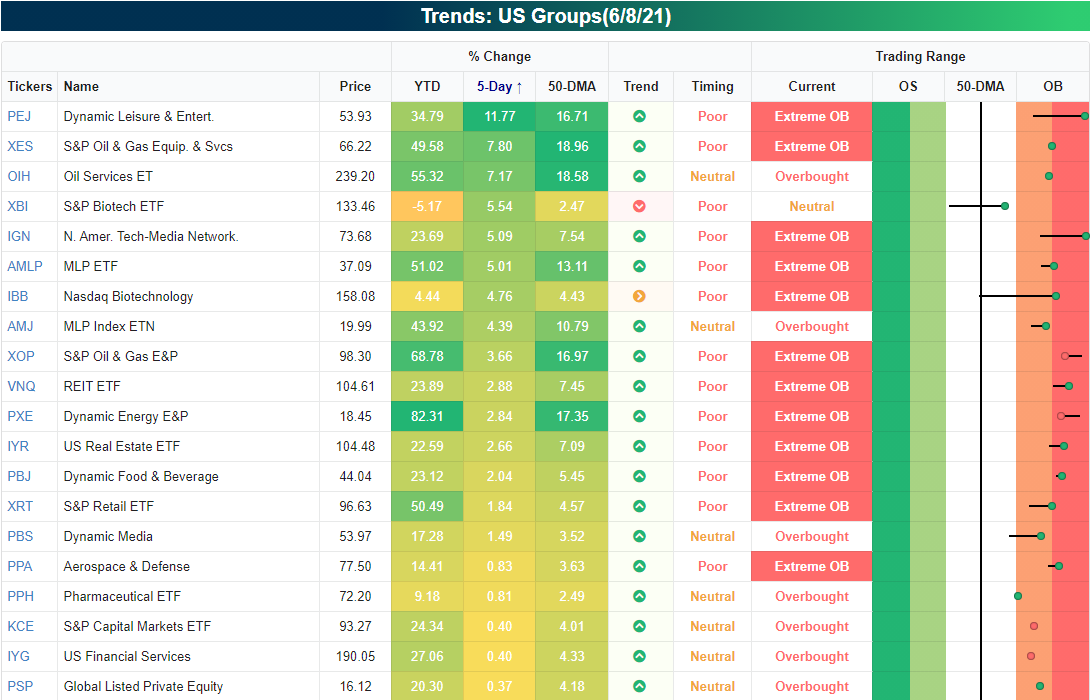 Pivoting back to the Dynamic Leisure & Entertainment Portfolio ETF (PEJ), the double-digit move in the past week is actually part of a longer near-vertical move that began in mid-May.  Since the May 12th low, PEJ has rallied 28.72% through today moving it to within 2% of its 52-week high from back on March 15th.  Additionally, looking just at the nearly 12% rally of the past week, a massive portion of the move came last Wednesday when it rose over 10% in a single session. In fact, last Wednesday was so volatile that even after a few days of higher closes, it is still below last Wednesday’s intraday high. 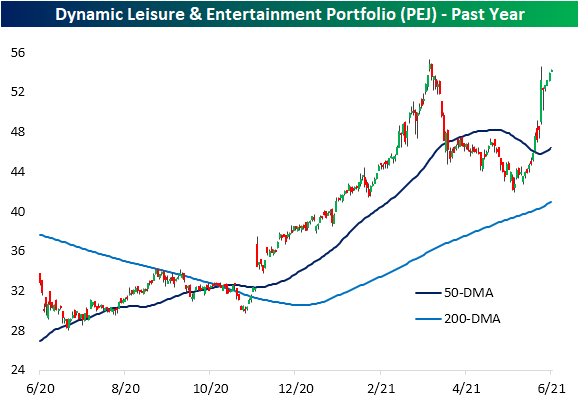 It is hard to mention parabolic moves these days without some mention of a meme stock, and of course, the massive move for PEJ is meme-related.  Below we show the ten best-performing holdings of PEJ over the past week. Topping the list is AMC Networks (AMCX) with a 31.67% gain in the past week alone.  After that move, AMCX is just shy of doubling year to date.  While sharing a similar name, AMCX is not to be confused (although the meme traders seem to be doing just that) for AMC Entertainment (AMC) which has taken center stage with regards to meme stocks lately. In other words, the AMCX has gotten caught up in the meme stock mania alongside AMC. While AMCX is up big, the chart is extremely extended above its 50-DMA, and at the moment is setting up in what appears to be a head and shoulders pattern. From a technical perspective, that is viewed as a bearish pattern, and for that pattern to be confirmed, it would have to fall below the past several months’ support at around $44 after failing to move above the January and more importantly mid-March highs.

While it has no doubt had an impact, the move in PEJ has not solely been due to the strength of AMCX. The stock only ranks as the tenth-largest holding accounting for 3.26% of the portfolio. There have also been a handful of other strong performers pulling weight like Lions Gate Entertainment (LFG/A) and Cheesecake Factory (CAKE) which both have risen over 9%. Everi (EVRI) has also risen considerably, notching an 8.29% five-day gain.  Click here to view Bespoke’s premium membership options for our best research available. 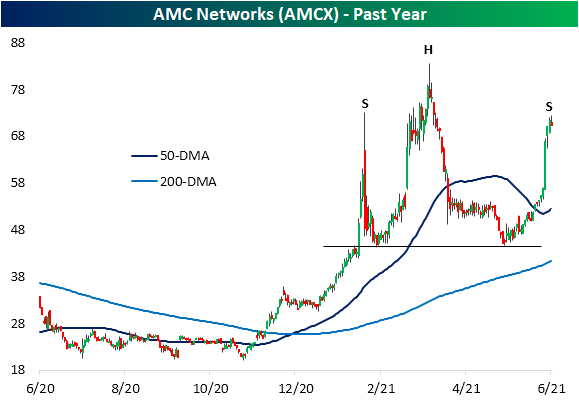