The Conference Board’s Index of Leading Indicators for July came in stronger than expected, rising 1.4% compared to expectations for a gain of 1.1%. From its high of 112.0 in January to its low in April, leading indicators saw the largest three-month decline in the history of the index.  Since then, we’ve now seen the largest three-month increase on record.  Unfortunately, the magnitude of the increase hasn’t been nearly as strong as the decline, but it’s an improvement nonetheless.

This month’s stronger than expected increase in leading indicators was also notable for what it suggests about the business cycle.  As shown in the chart, the bounce of the last three months has now erased nearly half of the decline from January through April, but more importantly, the only other times the index has risen three times in a row during a recession was in the last three months of the 1981/1982 contraction from September through November and the last three months of the Financial Crisis from April to June 2009. If past history is any guide, that would suggest that the COVID-recession ended in July or earlier.

Looking at the ratio of leading to coincident indicators shows an even stronger picture. As we have mentioned numerous times in the past, this ratio always starts to roll over in advance of a recession.  Interestingly enough, leading up to the most recent recession, this ratio started drifting lower beginning in late 2018, although not anywhere close to the typical weakness you would see heading into prior recessions.  In other words, the economy was already on a relatively shaky footing in advance of COVID.

In the last three months, though, the ratio has seen a large rebound nearly erasing all of its declines from the last peak.  At 22 months now since the last peak, the current streak has been a lengthy one, but looking just at the period since the end of the Financial Crisis, the current streak isn’t even the longest. That title belongs to the 27-month drought from mid-2011 through late 2013.  Like what you see?  Start a two-week free trial to Bespoke Institutional for full access to all of our research and interactive tools. 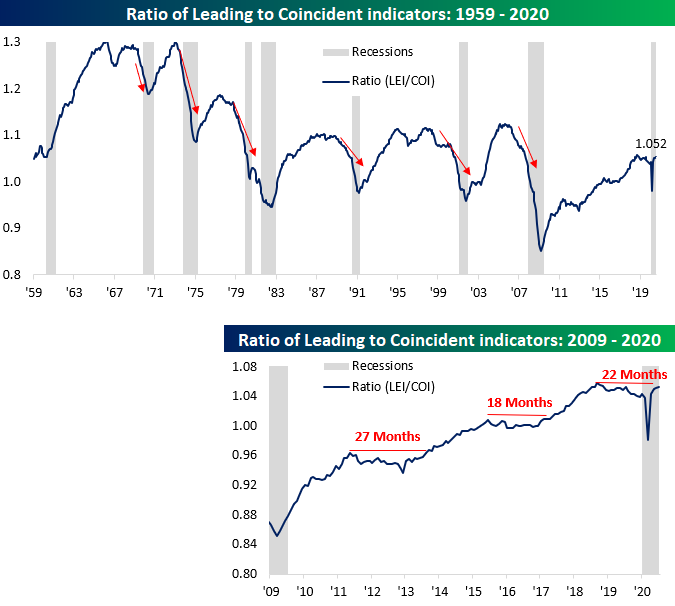