Leading Indicators Returning Back to a Normal Range

Like some other indicators earlier this year, the index of Leading Economic Indicators released each month by the Conference Board experienced both its largest-ever m/m decline and increase in the span of under six months.  In March, when the US economy was essentially shut down, the index of Leading Indicators dropped a record 7.4% in just a single month.  By June, as the economy started re-opening, the index saw a record m/m gain of over 3%.  While it hasn’t been enough to erase all of the declines, it has come a long way.  Since that June surge, though, we’ve seen a deceleration of the growth in Leading Indicators for three months in a row to September’s level of 0.66%.  While 0.66% is down a lot from the June high, before the last three months, 0.66% would have been the strongest level of growth in this index since February 2018.

As mentioned above, the index of Leading Indicators is still well off of its highs, but it has still erased more than half of the declines we saw prior to the COVID crash.  The chart below shows the Leading Indicators index going back to 1959, and looking at the index’s behavior during prior recessions would once again suggest that the recession is over.  In every recession of the last 60 years, never before has there been a time where the index saw this large of an increase from its lows with the economy still in recession.

The ratio of Leading Indicators to Coincident Indicators also shows an interesting trend with regards to the current period relative to others.  First off, as we have noted in the past, throughout history the ratio has typically started to roll over well before the onset of a recession.  Even in the current period, the ratio peaked more than a year before the recession started.  Compared to prior periods, the rollover wasn’t nearly as large in magnitude as prior periods, and there’s obviously no way this ratio could have predicted a global pandemic, but technically speaking its record of accurately predicting recessions remains intact.

The lower chart shows a larger version of the ratio since the start of 2009, and in it, we show each of the prior periods during this span where the ratio saw an extended period without making a new high.  For the current period, it has now been 24 months since the ratio’s last peak.  While that’s a long time, from the middle of 2011 through mid to late 2013, the index went even longer without making a new high. Click here to view Bespoke’s premium membership options for our best research available. 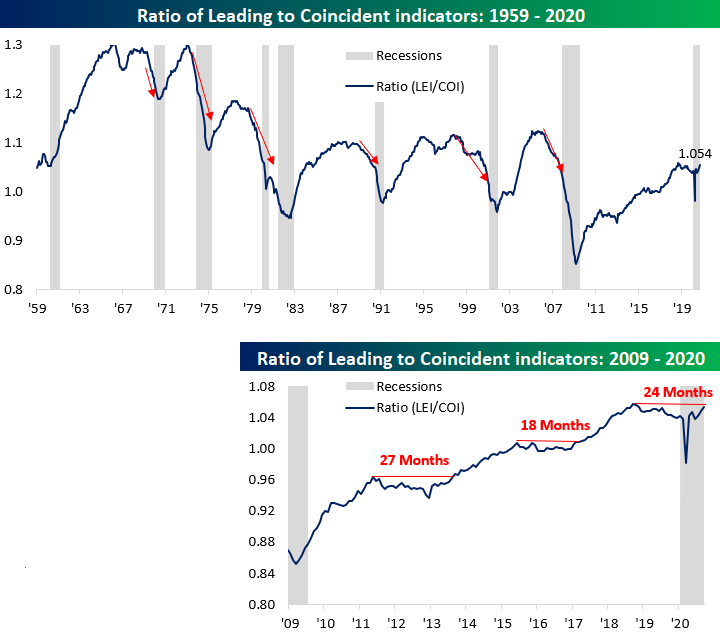