We didn’t mention it Friday, but among the multitude of weaker than expected economic indicators last week, the index of Leading Economic Indicators for September was one of them.  While the consensus forecast was for the index to remain unchanged from August’s level, it actually declined 0.1%.  At times in the past, we have highlighted how sharp downturns in the ratio between Leading and Coincident indicators have often preceded recessions.

In the current cycle, it has now been twelve months since the ratio peaked last September, and while that raises the risk of a recession, we would note that the current downturn in this ratio has been much more gradual than the steep downturns that we saw leading up to prior recessions. Additionally, in both the 1960s and 1990s, we saw instances where the ratio saw much steeper declines without a recession.

The recent downturn in the ratio between Leading and Coincident Indicators isn’t even the first time during this cycle that we have seen the ratio lose momentum and show similar declines.  From mid-2011 through late 2013, the ratio went 27 months without hitting a new cycle high, and then again from the second half of 2015 through the end of 2016, there was an 18-month stretch without a new high.  In the current period, it has only been 12 months without a new high.

While the current lull in the Leading vs Coincident Indicator ratio hasn’t been long yet, it is still declining.  Therefore, it’s nowhere near close to snapping the streak of months without a high.  Just looking at the last two periods, for example, from the time the ratio bottomed, it took nine months in 2013 and 11 months in 2016 before the ratio fully rebounded and hit a new high for the cycle.  In other words, if the ratio doesn’t start rebounding soon, this period will go down as the longest period of economic slack/consolidation of the expansion.  Join Bespoke Premium now to get Bespoke’s most actionable stock market research.  Click here to get your first 14 days free. 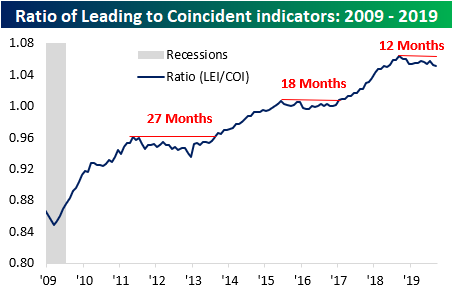