Leading and Lagging Groups Since the July High

With the S&P 500 finally taking out its July high on Monday, there has been a lot of movement below the surface in terms of leading and lagging groups.  In fact, 18 groups within the S&P 500 are up over 5% since the last high back in July while 13 are down over 5%.  In the table below, we list the best and worst-performing groups since the 7/26 closing high.  To make the list, each group had to either be up or down 2%.

On the upside, leadership has been spread across a variety of sectors.  Leading the way higher, Tech Hardware (think Apple) has rallied over 17% and with an overall weight in the index of nearly 4%, this group has been a key leader of the market.  The only other group up over 15% is Household Durables (homebuilders), which has a much smaller weight in the S&P 500.  Behind these two groups, another five – Multiline Retail, Construction Materials, Construction & Engineering, Biotech, and Trading Companies –  have seen double-digit gains since the late July high.  The fact that the seven groups with the strongest gains come from five different sectors suggests that the rally isn’t especially narrow, even if the percentage of stocks hitting new highs has been lacking.

On the downside, Leisure Equipment and Products has been the worst performing group in the S&P 500 with a decline of 21.9%.  The weakness in this group, though, is 100% attributable to Hasbro (HAS), which is the only stock in the group (hence its 0.1% weight in the S&P 500).  Behind Leisure, Communications Equipment has dropped more than 14% driven by weakness in Cisco (CSCO).  Finally, what would a list of losers be without a group from the Energy sector?

What’s most interesting about this list is that even as the market has been essentially flat over the last three months, there’s been a lot of dispersion in performance – not just within the market, but also within sectors. Take the Consumer Discretionary sector, for example. While five of the sector’s groups are on the list of best performers since the 7/26 high, there are also five on the list of biggest losers.  Start a two-week free trial to Bespoke Institutional for full access to some of the most sought after research on the street, including our Trend Analyzer tool. 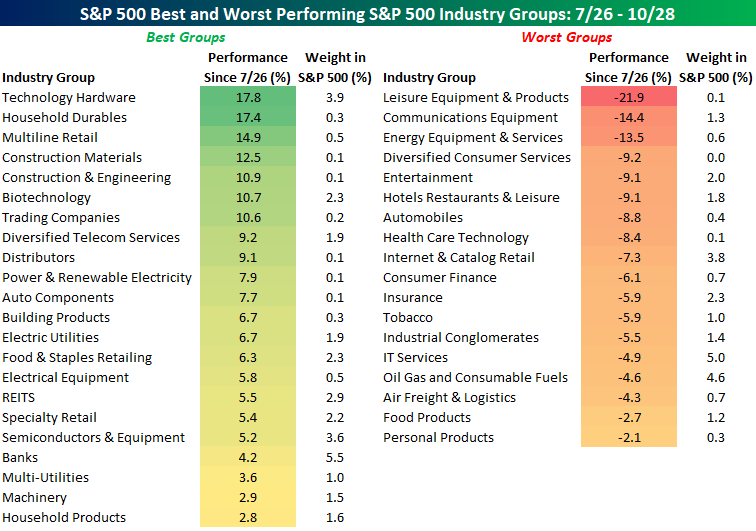