Leaders and Laggards Since FOMC

We’ve now had nearly a full week of trading since last Wednesday’s FOMC meeting where Fed Chair Powell suggested that the punch bowl isn’t going to be taken away anytime soon.  During that time, we’ve seen a real shift in leadership as defensive sectors have sold off while cyclical sectors have been on fire.  Energy – yes, Energy – has been the top-performing sector with a gain of 3.5% while Industrials aren’t far behind with a gain of 2.8%,  Behind these two, Technology and Financials have also comfortably outperformed the S&P 500’s gain of 1.2%.  On the downside, Real Estate and Utilities, two of the market’s most popular sectors for much of 2019 due to their dividend yields, have both dropped over 1% while Consumer Staples and Health Care have also sold off. 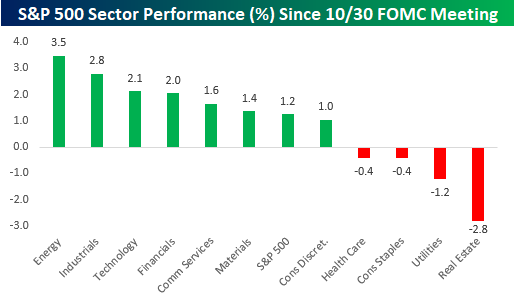 Due to the fact that we are also in the thick of earnings season, it’s a bit more difficult to see how the Fed’s actions last week impacted individual stocks as some of the best and worst performances over the last week have been earnings-related.  With that caveat, the tables below list the best and worst-performing S&P 500 stocks over the last week.  Starting off with the winners, three S&P 500 stocks are up over 20% in the last week, and all three were due to earnings reports.  Overall, 12 stocks have rallied over 10%, while all 25 of the top performers are up over 7%.  In terms of sector representation on the list, nearly a third (8) of the stocks on the list are from the Technology sector, while another five come from the Consumer Discretionary sector.  The remaining 12 stocks on the list come from five different sectors. 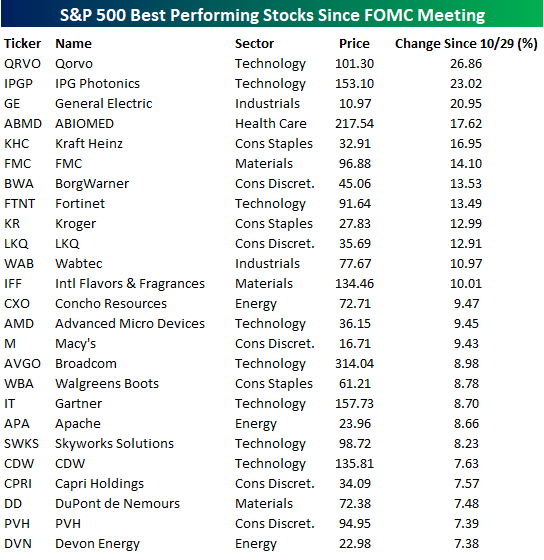 On the downside, 8 of the 25 worst performers since last week’s FOMC meeting are down over 10% with Arista Networks (ANET) losing nearly a quarter of its value.  Again, ANET’s decline was tied to an earnings report as opposed to a reaction to the FOMC.  In terms of overall sector representation, though, the underperformance of the Real Estate sector highlighted above is also evident on this list as eight of the companies listed come from that sector.  Sign up for Bespoke’s “2020” special and get our upcoming Bespoke Report 2020 Market Outlook and Investor Toolkit. 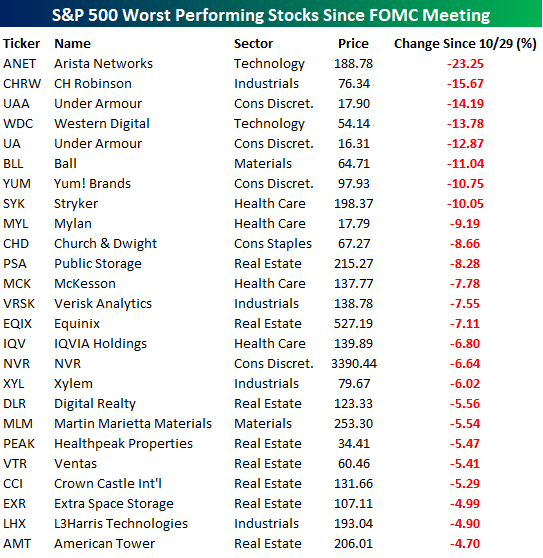