On Tuesday, ISM’s reading on the manufacturing sector rose by more than expected, but the service counterpart released today saw the opposite results.  The headline index was expected to fall to 57 but instead fell by slightly more with the headline number coming in at 56.9.  Although lower than the past two months, that is still indicative of expansionary activity in the service sector as the index remains at some of the highest levels of the past two years. The same can be said for the composite index which outside of last month, is at its highest level since February of last year. 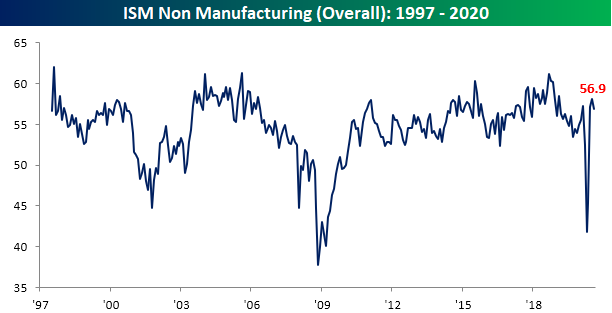 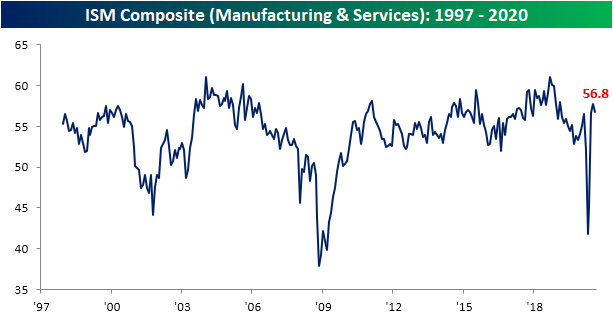 Breadth in this month’s report was fairly mixed.  The majority of indices rose month over month with the biggest increases in prices, exports, and employment.  On the other hand, three indices fell and two are in contraction. Of the indices that did fall, the declines were historically large. 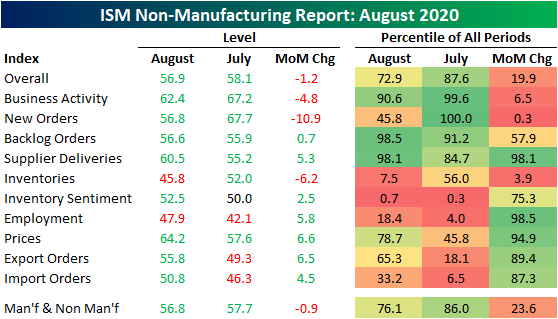 The index that experienced the most dramatic decline was that for New Orders.  Last month, this index was at a record high of 67.7, but in a complete 180, the index had its second-largest decline on record in August (behind April’s 20 point decline) and is now in the middle of its historical range. That does not mean that there was an overall decline in new orders though.  The level of 56.8 still indicates demand grew in August, just at a slower rate than in July.

Even though new demand was not as strong, businesses still have plenty on their plates as is evident through the index of Backlog Orders.  The index for Backlog Orders rose to 56.6 from 55.9.  That is in the 98th percentile of all readings as the index is currently at its highest level since May of 2018.

The attempt to fill the growing number of orders has led to inventory drawdowns.  The index for Inventories showed a contractionary reading of 45.8.  That compares to an expansionary reading of 52 last month.  Outside of March’s even lower reading of 41.5, you would have to go back to February of 2010 to find the next lowest reading of this index.  Additionally, as inventories have fallen, other supply chain issues seem to have appeared.  The index for Supplier Delivers in which higher readings point to longer lead times, experienced its sixth-largest monthly increase on record. That increase brings the index to 60.5 which is tied with November of 2005 for the fifth-highest reading on record.

With stronger demand, falling inventories, and greater difficulty getting products from suppliers in a timely manner, it makes intuitive sense that prices are rising fairly rapidly.  The index for prices paid rose to 64.2 which is the highest level since November of 2018.

Perhaps the measure that has remained the weakest has been employment.  Since the low in April, the index for Employment has risen every month except for last month.  Even though it was higher again in August, it has shown a sixth straight contractionary reading. Although more businesses are reporting lower than higher levels of employment, the commentary section of the report did offer some hope.  One comment noted that “The need for employees is greater, but we are having a difficult time filling open positions” while another stated that “hiring is authorized, but slow to materialize”.Click here to view Bespoke’s premium membership options for our best research available.