Largest YTD Change in Prices at the Pump Since 2009

It’s that time of year again.  Summer driving season kicks off this weekend with the Memorial Day holiday, and if you’re planning on doing a road trip, you may want to consider a trailer for the back of the car to hold all the gas money.  The table below shows the AAA national average price of a gallon of gasoline on this day for every year since 2005.  At the current level of $3.04, the national average is the highest it has been at this time of year since 2014, and since 2005 there have been just six other years where prices were higher.  In terms of the YTD change, prices are already up 34.6% this year, which is the third-largest YTD increase since 2005 and the largest since 2009.  That’s not only nearly twice the historical average but also a big swing from last year when prices were actually down 24% YTD as of 5/26. 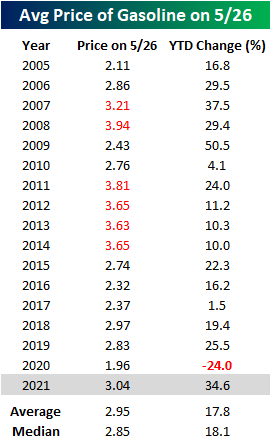 Given the big reversal from a 24% YTD decline last year to one of the largest YTD increases this year, you can imagine that gas prices are up a lot over the last year. Not only is the national average price up a lot, but it also just saw its largest y/y increase on record.  Back on May 4th, the y/y increase in the national average topped out at 63.98%, which just barely eclipsed the prior record high of 63.95% from back in January 2010 coming out of the Financial Crisis.  It should come as no surprise that the two largest y/y increases in gasoline prices since 2006 have both occurred coming out of major economic contractions.  Crude oil and gasoline are notoriously volatile, and their direction is highly correlated to the business cycle. 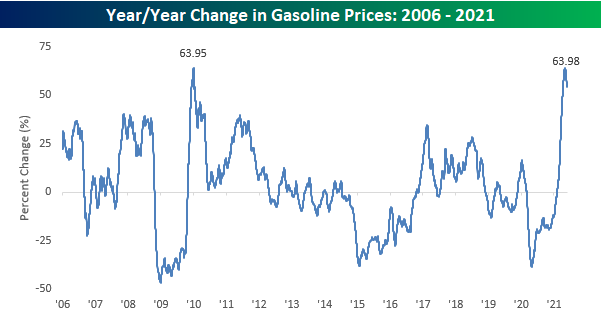 There’s no arguing the downside of higher gasoline prices for the consumer, but what’s done is done.  Looking ahead, seasonal trends suggest that barring a major disruption in supply, the upside potential for gasoline prices may be limited.  The chart below compares the YTD change in crude oil prices so far in 2021 to a composite of the average YTD change for all years since 2005.  While this year’s increase has been much steeper than the typical year, we have reached the time of year where gas prices typically start to peak out and trade sideways through the Summer before a steady decline to close out the year.  Click here to view Bespoke’s premium membership options for our best research available. 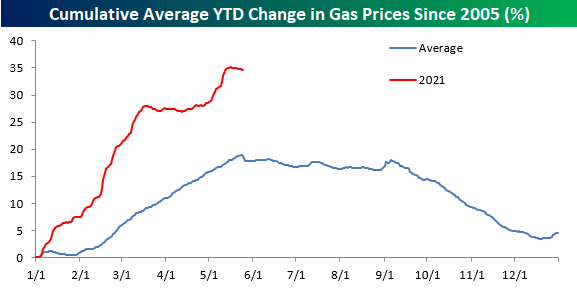