Earnings season begins in earnest next week with the first of the big banks out with Q2 results.  In the table below, we show the 29 stocks set to report over the next two weeks with market caps above $100 billion. Using our Earnings Explorer, we show historical Q2 earnings and sales beat rates versus analyst expectations.

Of all the stocks set to report over the next couple of weeks, there are a handful that have never missed EPS estimates on Q2 earnings.  Those names include Bank of America (BAC), UnitedHealth (UNH), NextEra Energy (NEE),  and Lockheed Martin (LMT). Intuitive Surgical (ISRG) is the only one to have never missed Q2 sales estimates.  Turning to a look at guidance, Intel (INTC) is the company on this list to most often raise guidance although its sales and EPS beat rates are more middling.  LMT and Philip Morris (PM) also have raised guidance more often than other stocks on the list.  For more in-depth analysis of earnings and how the stocks below have historically traded in reaction to their Q2 reports, join Bespoke Premium today! 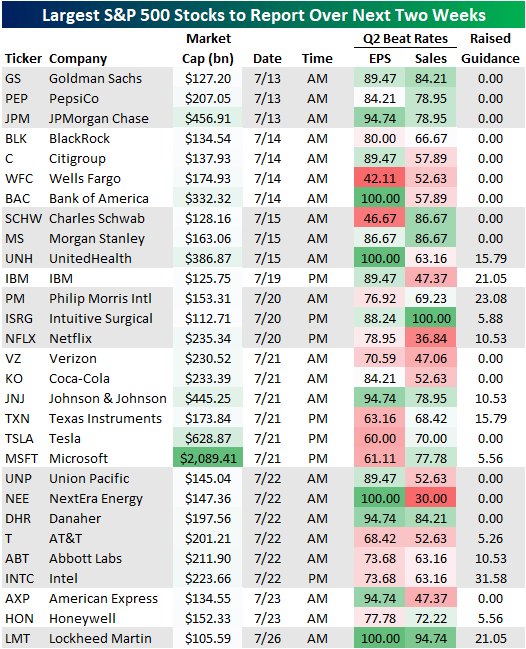