Just one month ago, manufacturing businesses surveyed by the Philadelphia Fed indicated the most optimistic outlook since early 2017.  Throw in the massive impact of the coronavirus and in one month that picture has been completely turned on its head.  Falling from 36.7 last month to -12.7 this month, the headline index is now back to the same level it was at in July of 2012.

Each of the individual components also fell quite dramatically with all but two, Number of Employees and Average Workweek, falling by double digits. Not a single component rose this month with multiple components, in addition to the headline index, falling into negative territory. The worst decliners were those measuring demand as the indices for new orders and shipments were down sharply. Additionally, manufacturers have also seemed to have drawn down on existing business as inventories and unfilled orders are also down. 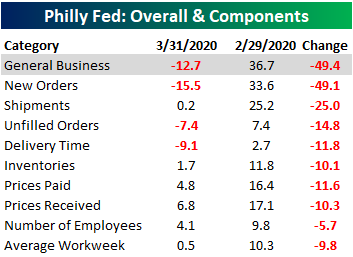 One of the key areas of weakness driving into the massive decline in the headline number this month was New Orders.  Last month, this index came in at 33.6 which was the highest level since May of 2018 and the fourth-highest reading of all months of the current cycle. Now at -15.5, this is the lowest level since June of 2012 and the third-lowest reading of the current cycle.

That 49.1 point decline month over month for new orders as well as the 49.4 point drop for the headline index are the largest monthly declines on record (chart below).  That seems to suggest that the shock to demand and general conditions reported by the region’s manufacturers has been more sharply negative than even any recessionary period in the past 52 years since the survey began. 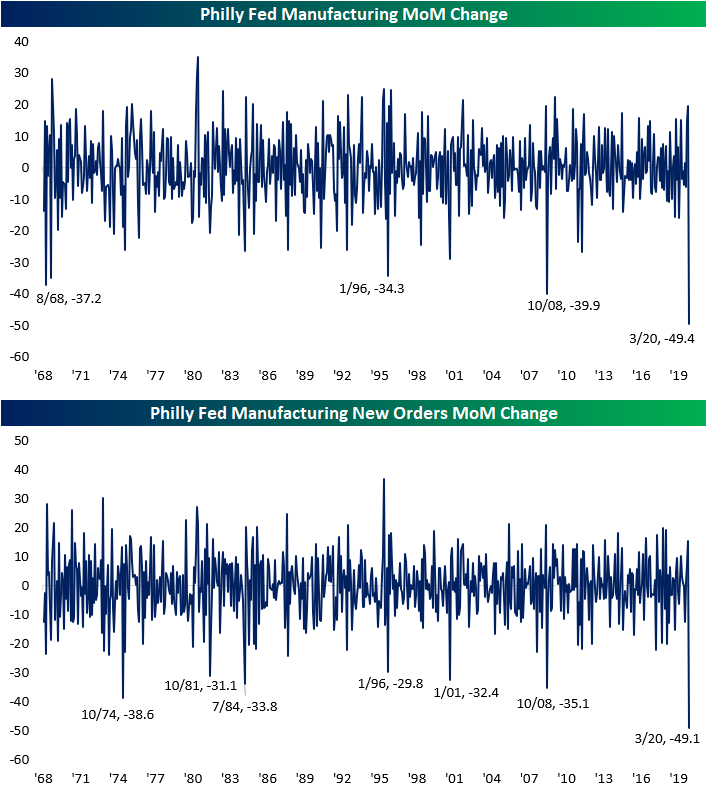 While it did not tip into negative territory, shipments are also down sharply, falling 25.2 points to 0.2. That is the fifth largest month-over-month decline on record for this category. This seems to further reinforce the idea that demand has weakened dramatically over the past month.

Given the shutdowns that have taken place and the rise in jobless claims this week, it should come as no surprise that fewer businesses are taking on more workers and the length of the workweek is also being cut down.  Considering social distancing has continued to be on the rise and businesses now seem to face a lack of demand, it will not be surprising to see these readings tip negative next month. Start a two-week free trial to Bespoke Institutional to access our interactive economic indicators monitor and much more.