Yesterday, we took a look at the makeup of the S&P 500’s largest 25 companies in 2021 and compared it to that of 10 years ago. Today, we will be extending the study to 2001, twenty years ago right before the 9/11 attacks. On the day before 9/11, the sectors with the largest number of components in the top 25 in terms of market cap were Consumer Staples, Health Care, Technology, Financials, and Communication Services. While all of these sectors still hold a spot in the current top 25 list, the makeup has shifted substantially.  Energy and Industrials, which each accounted for 8% of the top 25 companies in 2001, now have zero representation in today’s list. Consumer Staples also reduced its count from five to two.

Only seven companies that made up the list of top 25 names in September 2001 remain on the list today. Those seven companies are Microsoft (MSFT), J&J (JNJ), Walmart (WMT), Home Depot (HD), Procter & Gamble (PG), Bank of America (BAC) and Pfizer (PFE). The average increase in market cap of these seven equities, excluding dividends, is 241.88% with a median of 263.84%. While the turnover of this list has been high over the last 20 years, every member of this list is still in operation today, but two have been undergone mergers (Time Warner & Royal Dutch Petroleum). Interestingly enough, the members of this list have approximately the same proportionate makeup of the S&P 500, with only a 1.89% increase in the weightings of the top 25 stocks now relative to September 2001. 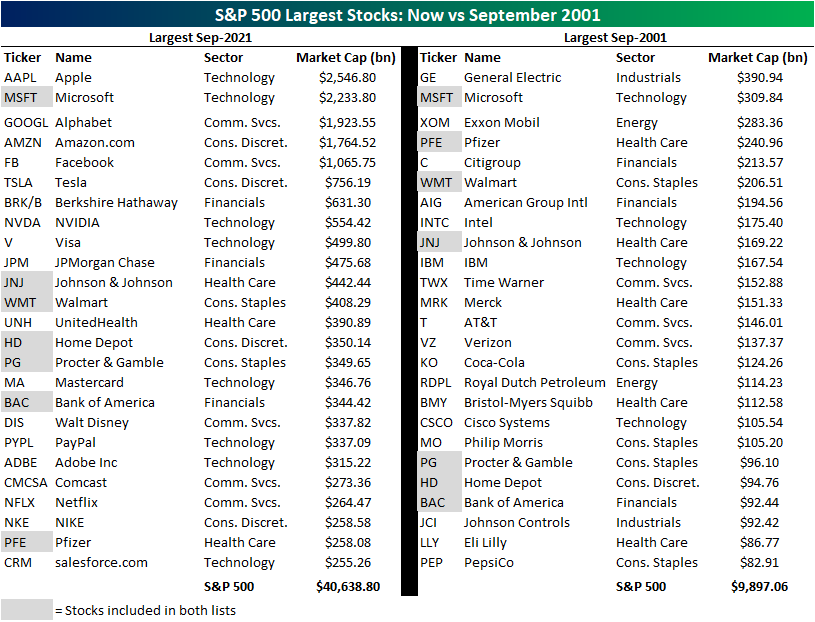 The US economy today is far different than it was in 2001. As it has changed, some companies have adapted and experienced massive growth, while others have been left in the dust. Apart from the two companies that are no longer independently publicly traded, the average return of the 25 largest companies from 2001 is 92.94% with a median return of 49.08%. Over that same period, the S&P 500 has returned 310.61%. 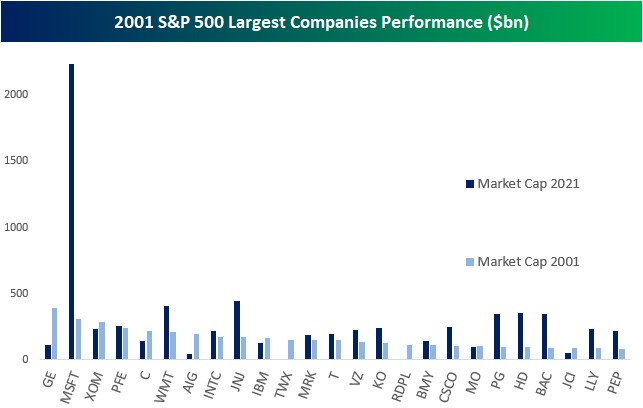