Labor Top of Mind For US Small Business 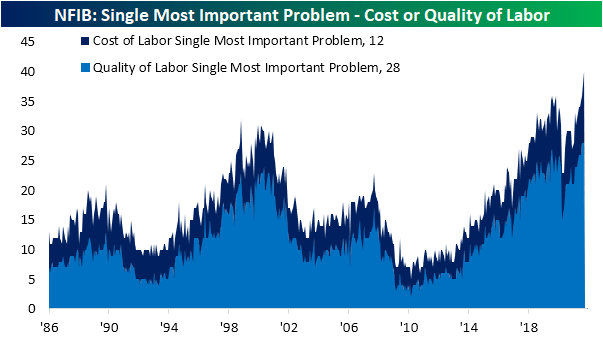 While a massive share of respondents reported either cost or quality of labor as their biggest issue, the next largest share sees government-related issues as the biggest concern.  A combined 28% reported either taxes or government requirements & red tape as their most important problems which is actually a muted share on a historical basis.  Even though it was up 1 percentage point to 17% in September, the percentage reporting taxes as their biggest problem sits in the bottom decile of the historical range and the reading on government requirements and red tape sits in the 15th percentile.

As for the other readings, Poor Sales, Competition from Big Business, and Financial & Interest Rate concerns are at record lows.  While not at a record low, the Cost/Availability of Insurance fell by a record amount. Inflation also experienced a historic drop of 3 percentage points in September. With that said, 10% of owners still reported that as their biggest problem which is still in the top 5% of all readings. The single biggest gainer in September was “Other”. This category is not as old as the other problems but the 7 percentage point surge was a record jump in a single month and leaves the reading at one of the highest levels to date.   Click here to view Bespoke’s premium membership options.