Keeping track of the improvement – and in some cases, deterioration – of COVID numbers across the US is a big job.  Every day in The Morning Lineup we update the table below to identify where COVID-19 case counts are rising or falling, and where they stand relative to the recent history of that state’s outbreak.  We also include a second table, which shows the improvement or deterioration in testing in each state.

At the opposite end of the spectrum is a state like Minnesota, which is dealing with accelerating numbers of cases even as positive test counts are rising, implying more rapid spread of the virus.

To summarize, most states are reporting slower case count growth, which is a good sign, and relatively few are reporting increases in positive test rates.  As more states re-open, it will be helpful to monitor these numbers along with hospitalization rates.  A rise in case counts is to be expected with more activity.  Start a two-week free trial to Bespoke Institutional to access our Chart Scanner, custom screens, and much more.

To assess the overall breadth of successful virus containment, in the chart below we show the number of states that have rising cases and rising positive rates. For both series, declines are “good” because they indicate increased testing penetration and lower case counts across the country. As shown, less than 15 states are seeing positive test rates rise, while only slightly more (the lowest of the outbreak) are seeing the number of cases pick up. 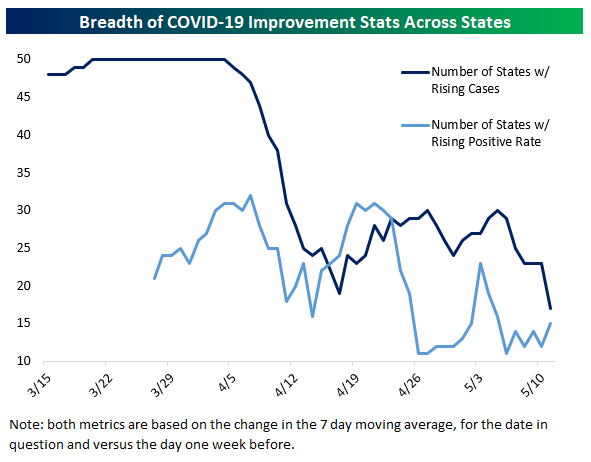