The Kansas City Fed released the results of their June survey of the region’s manufacturing sector this morning.  Like the Richmond Fed reading two days ago and the Markit PMI yesterday, the composite index saw an uptick in June indicating some acceleration in manufacturing activity. The index rose one point to 27 which also exceeded expectations that were calling for the composite to fall further to 24 after a five-point drop last month.  Similar to other regional Fed surveys, while the readings on current conditions have peaked, outlooks are cheerier with the index for expectations reaching a record high of 37 in June. 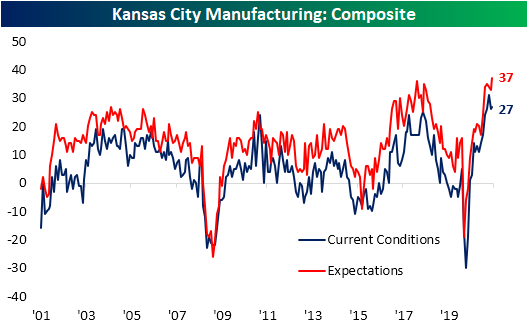 While the composite index for future expectations was the only category of the survey to come in at a record high, many other indices are similarly in the top few percentiles of their historical ranges.  Consistent with other regions, breadth in this month’s report was a bit mixed with more categories declining than rising month over month.  Regardless, even after those declines, these indices point to robust growth, long lead times, higher prices, and attempts to take on more workers amidst worker shortages. 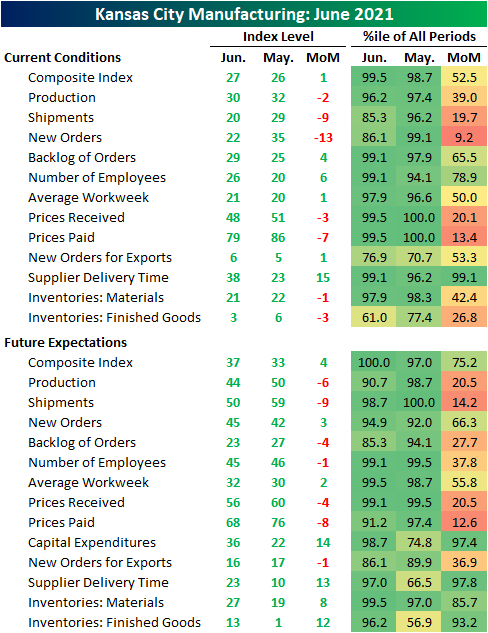 One of the main areas to have seen declines concern demand and output. New Orders saw a particularly large decline with the 13 point drop ranking in the bottom decile of all monthly changes. That brought the index to the lowest level in four months. Production and Shipments also saw deceleration although to a lesser extent than New Orders. With order growth hitting the brakes but still at healthy levels, backlogs continue to grow at a historic rate. Granted, that is not as bad as earlier this spring. 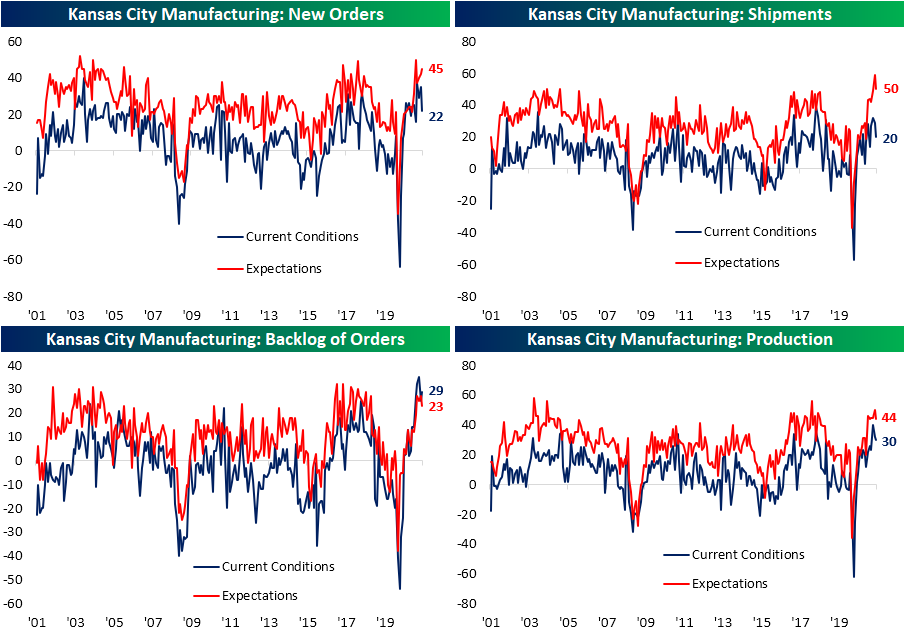 The indices tracking inventories for materials and finished goods both declined in June, but material inventories are growing at a much faster clip of the two and expectations are just off a record high.  Additionally, while the region’s manufacturing firms report fairly modest growth in current finished good inventories, expectations are more positive with that index hitting the highest level in three years.  Regardless, as shown in the chart below, the spread between inventory levels of inputs and outputs has been at some of the highest levels on record over the past several months with another uptick this month. In other words, manufacturers appear to be having some trouble building finished good inventories. 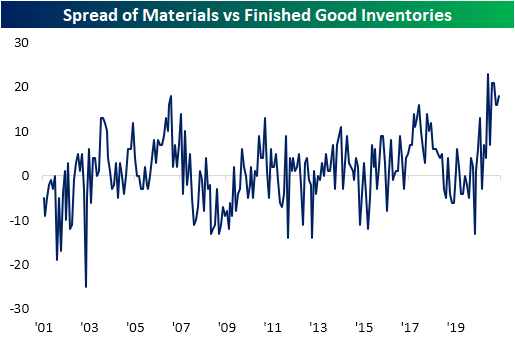 One theme of the report’s commentary and special questions was a labor shortage. That potentially could be a reason for the aforementioned disconnect in material and finished good inventories. In spite of that labor shortage, the index for Number of Employees rose 6 points in June to the top 1% of all readings.  While expectations declined sequentially, this month’s reading was also still above any reading on record outside of the past three months. Similarly, Average Workweek continues to come in at strong levels while expectations tied June 2018 for a record high. So while firms are stating they cannot find workers, they are still taking on new employees at a historically strong clip. 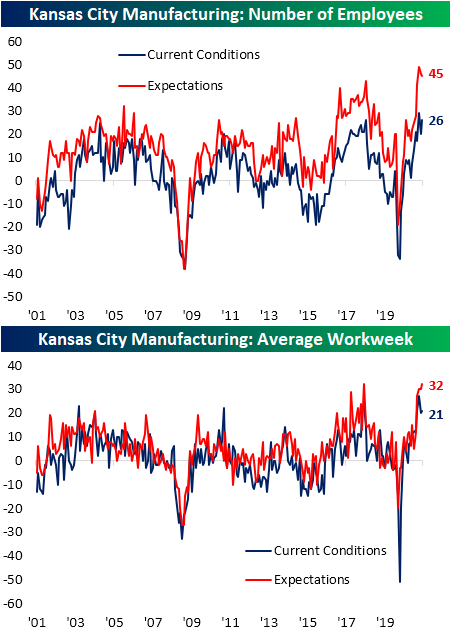 As for the other side of the production function, firms are also rapidly increasing plans to increase Capital Expenditure. The index tracking this metric saw one of the biggest one-month increases on record which brought it to the highest level since September 2018.  Additionally, in the special questions of the survey, 41% of respondents said they are planning to increase investment in labor-saving automation on account of labor shortages.  Another 17% planned to keep the same pace of investment as in the past.  Overall, manufacturers are reporting strong albeit slowing demand, and to keep up with it, they are trying to take on more workers but shortages are affecting an ability to hire.  As a result, more businesses are beginning to invest in capital.  Click here to view all of Bespoke’s premium membership options and sign up for a trial. 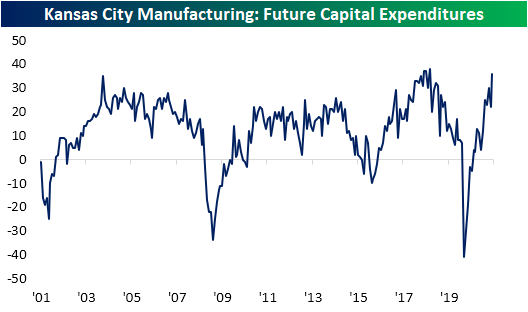