Just Another Average Year for Prices At the Pump

Or should we say a below-average year?  This summer has been quite an interesting one for American drivers.  After a record surge earlier this year, the national average price of a gallon of gas, according to AAA, has retraced much of its increase. During August alone, the national average price declined 9.1%, which was the largest August decline since at least 2005 compared to an average August decline of 0.27%.  Even more notable is that with a YTD increase of 16.5%, this year’s increase now ranks below the historical average of 18.0% (median: +14.2%).  Before we all start leaving our cars running while running into 7-11 for a Slurpee, we would note that prices are still extremely high.  At a national average price of $3.83 per gallon, we haven’t seen prices this high at the end of August since 2012. 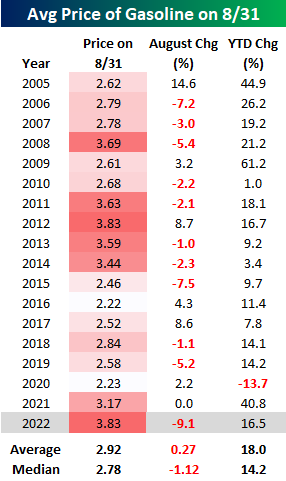 The chart below compares the YTD change in the national average price of a gallon of gas this year to the average YTD change since 2005.  Could you have ever imagined back in mid-June, when prices were up over 50% YTD, that by the end of August prices would be up less than average? 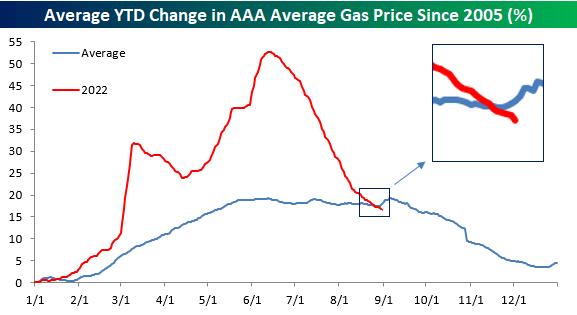 Earlier, we noted that prices have been trending steadily lower for several weeks now.  The current streak of daily declines now ranks as the second longest since at least 2005.  Similarly, the chart below shows the number of days by year that average prices increased during the June, July, and August summer months. Since the start of June, there were only 13 days when the national average price increased, and they were all in early June. Since then, prices have been lower every day.  The only years with fewer positive days during the summer months were 2007 and 2016. Since July 4th, this was also the first year that prices were down every day from July 4th through the end of August.  Click here to learn more about Bespoke’s premium stock market research service. 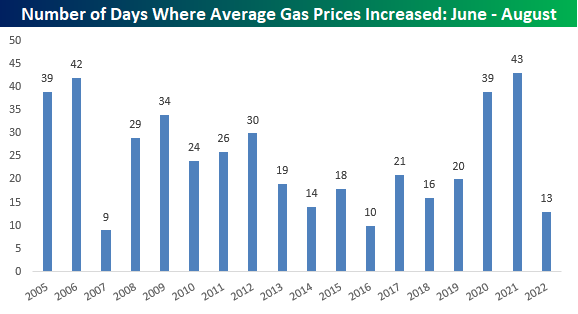