The month of June, the second quarter, and the first half of 2021 are almost in the bag. In the table below, we take a look at the best and worst performers in the Russell 1,000 month to date. For the best performers, we look at the 21 names that are up at least 25% MTD. As for the other side of the performance spectrum, we show the 20 worst performers.

Topping the list with a 75.6% MTD rally through yesterday’s close has been Virgin Galactic (SPCE).  A large portion of that has come in the past few sessions alone with a 38.87% gain last Friday which has been partially erased early this week. Given that huge one-day jump, SPCE is over 90% above its 50-DMA and as such, it is the stock that is currently the most extended above its 50-DMA in percentage terms of the whole Russell 1,000. The next best performer in the index has been a recent IPO (debuted on April 15th), TuSimple Holdings (TSP).  The stock was also up over 70% in June through yesterday’s close leaving it just off its high from June 14th. After TSP and SPCE, there is a big drop in the percent change this month as Iovance Biotherapeutics (IOVA) is next up with a gain of 45%.  That move has reversed some of the declines earlier in the year, although the price is still half of its 52-week high. It is a similar story for Fastly (FSLY) and Skillz (SKLZ) which are also more than 50% below their respective 52-week highs. Additionally, IOVA, FSLY and Sunrun (RUN) are the few names that are still down on the quarter even after being some of the top performers in June. 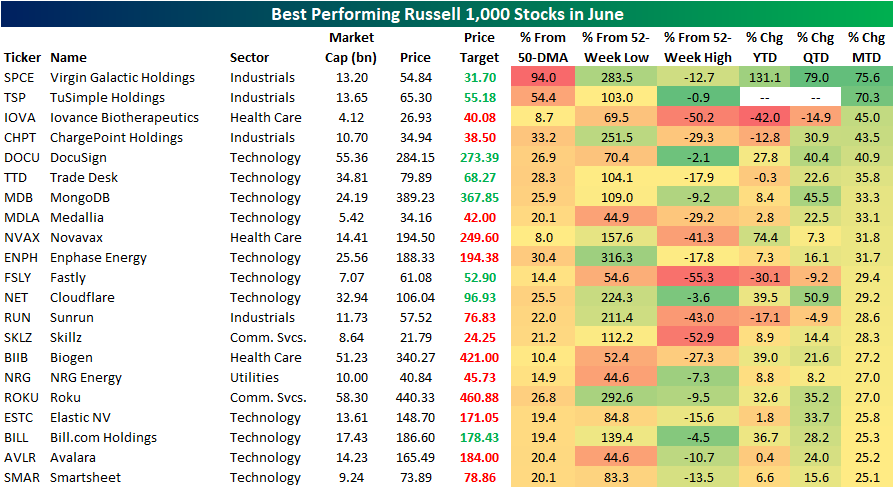 Pivoting over to the worst performers, there are 38 stocks in the Russell 1000 that are down double digits month to date. By far the worst of these has been CureVac (CVAC). Similar to how a significant portion of SPCE’s gains came from a single day, most of CVAC’s losses are a result of a 38.99% decline on June 17th.  The catalyst for that decline was the announcement that the company’s COVID-19 vaccine was only 47% effective. The next worst performers are two more Health Care stocks that plummeted on disappointing trials data: Exelixis (EXEL) and Sage Therapeutics (SAGE). Of the 20 worst performing Russell 1,000 stocks, EXEL is the closest to a 52-week low.  One of the next worst performers is the polar opposite.  Upstart (UPST) is up massively off the past year’s lows, and even after the 16.41% decline MTD, the stock is still up over 200% on the year. While many Health Care names are at the bottom of the list of month-to-date performance, one other notable theme is reopening plays.  Cruise liner Carnival (CCL) as well as multiple airlines like America (AAL) and Southwest (LUV) also found their way onto the list.  Additionally, with metals like gold and copper broadly falling off their highs after significant runs over the past year, Reliance Steel & Aluminum (RS), Newmont (NEM), and Freeport-McMoRan (FCS) are also a few of the worst performers this month.   Click here to view Bespoke’s premium membership options for our best research available. 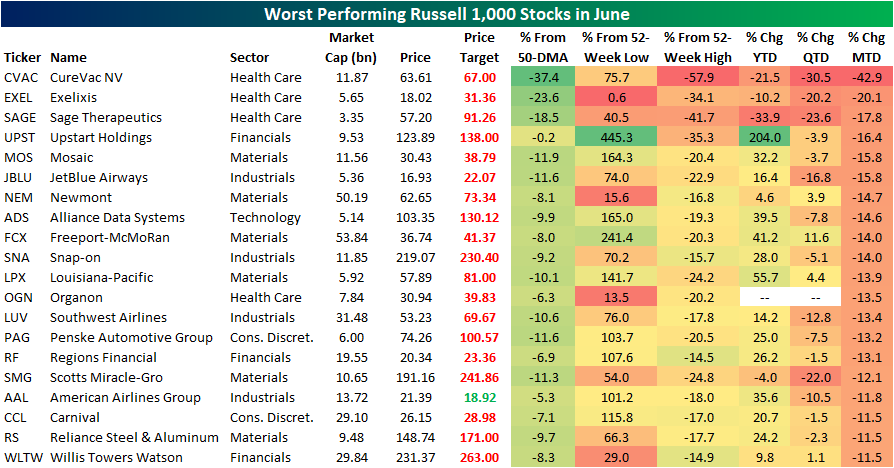