Jonesing For A Hedge

The world is a scary place right now.  10% of the US population and 20% of the labor force have filed for unemployment insurance in the last few weeks, and stock markets have seen record volatility.  For the Americans that do have more than $400 saved up, the question is where do you put it?  With interest rates at zero and with central banks flooding the market with liquidity, many are concerned that the dollar they put under the mattress today won’t be worth that much when the rainy day comes. Sure, the stock market has historically delivered superior returns, but those above average returns aren’t guaranteed to be there when you need it either.  Gold, on the other hand, has fared relatively well.  After a sharp decline in the early days of the Covid Crash, it has since broken out to five-year highs and is only about 10% from all-time highs.

In addition to gold, bitcoin has done extremely well recently, and unlike gold which is normally associated with grumpy old guys, bitcoin is cutting edge.  Just today, bitcoin received another endorsement as it was reported that hedge fund legend Paul Tudor Jones has been buying the crypto-currency saying it reminds him of gold in the 1970s.  Like gold, bitcoin is considered an inflation hedge but an extremely volatile one at that.  Not only is it something they can’t make more of, but the supply is actually shrinking.  That’s because bitcoin has to be stored in a digital wallet and if you lose your wallet, you lose your bitcoin.  Way back in 2018, the Wall Street Journal reported that up to a fifth of all bitcoin had been lost and in most cases, those losses were permanent.

Looking at the recent performance of bitcoin, the last month or so has been extremely strong with the price more than doubling off its March lows.  After today’s PTJ bounce, it’s not far from its highest levels of the year right around $10,400. 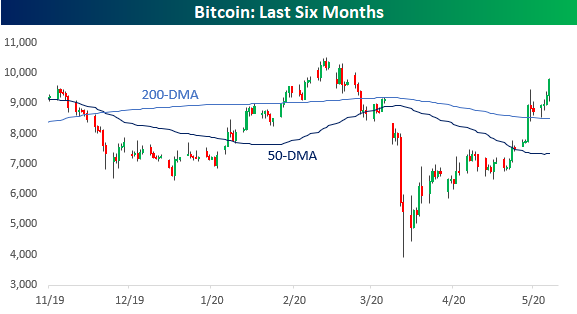 Just as bitcoin is nearing short-term resistance, it is also bumping up right against a long-term downtrend as well. Since its record high during the late 2017/early 2018 mania when bitcoin peaked just under 20,000, bitcoin has seen a series of lower highs at 14,000, then around 12,500, and earlier this year at 10,400.  It’s still below 10,000 now, but a break above 10,400 to new 2020 highs would put that downtrend line in the rearview mirror.  And while panic over pandemic has drowned out talk of just about anything else, not even COVID-19 would be able to silence the crypto crowd if that downtrend breaks.  Start a two-week free trial to Bespoke Institutional for full access to our research and interactive tools. 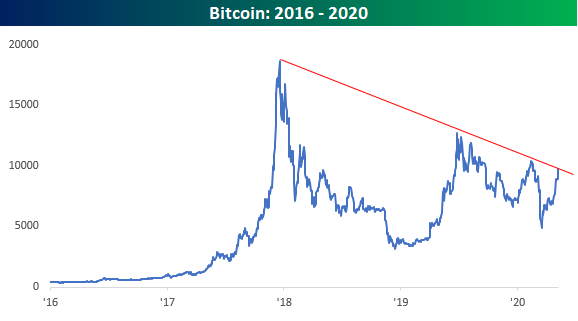