The December Job Openings and Labor Turnover Survey (JOLTS) from the BLS showed a sharp drop in the number of available jobs in the US economy.  While economists were expecting total job openings of 6.925 million, the actual level of available jobs was just 6.423 million.  That’s an enormous miss!  Since economist forecasts for this report are available (~2012), the latest report was the biggest shortfall relative to expectations in the history of the survey.  Not only that but December’s miss followed November’s report which was also much weaker than expected (6.80 mln vs 7.25 mln forecast), ranking as the third worst report relative to expectations in the history of the survey.

With back to back weak reports, the JOLTS has now seen its largest two-month decline on record (since 2001), and it’s not even close.  Behind the current two-month decline of over 900K available jobs, the next largest was in September 2015 when the two-month decline was 697K.  While there was no recession in 2015, there was major weakness in the Energy sector.  Furthermore, the only three other times the JOLTS fell more than 500K in a two-month span all occurred during recessions.  The most notable aspect of the weakness in the JOLTS report over the last two months, though, is how disconnected it is from just about every other employment-related report we have seen recently. 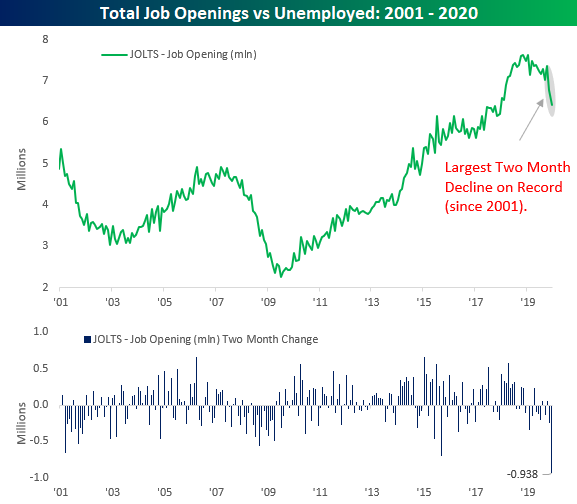 While there’s been a collapse in the number of available jobs in the US economy, we would note that there are still more available jobs than there are people looking for them.  The chart below compares the monthly number of job openings to the number of US Americans who are unemployed and looking for work.  Prior to 2018, there was never a time in the history of the JOLTS report when there were more job openings than there were unemployed Americans.  That changed in January 2018 and has been the same ever since.  While the spread has narrowed substantially from more than 1.5 million two months ago, there’s still a historic amount of tightness in the labor market even if the number of job openings has suddenly started to shrink.  Start a two-week free trial to Bespoke Institutional for full access to our highly sought market analysis and interactive investment tools. 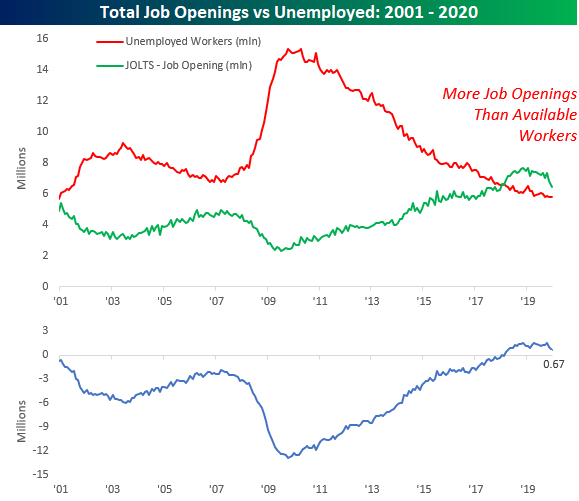