Jobless Claims on the Rise

As we have mentioned over the past couple of weeks (see here and here), initial jobless claims have not done much over the past year as the indicator has been rangebound with an increasingly tighter range.  That dynamic shifted a bit this week as claims came in worse than expected, rising to 225K from 211K last week versus forecasts of 215K.

While the record streaks at or below 300K and 250K are still in place by a healthy margin (those streaks now reaching 245 and 110 consecutive weeks long, respectively), this week marked a considerable break out from the upper end of the past several months’ range.  This week was also the sixth highest reading for claims of 2019 and the highest since June 21st when claims were 4K higher.  The 14K increase from last week was also the joint thirteenth largest one week increase of the past five years and the largest since April when claims rose by 37K right around the Easter holiday (the second-largest such increase of the past five years). 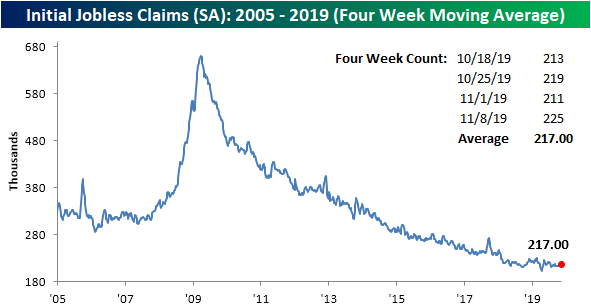 On a non-seasonally adjusted basis, claims rose by 31.1K to 236.7K. That is a slightly smaller change than the average change (+36K) for the current week of the year (45th) over the past ten years.  Given these seasonal factors, it was also the largest one week increase to the non-seasonally adjusted data of 2019 and marked a 0.7K increase from the same week last year. 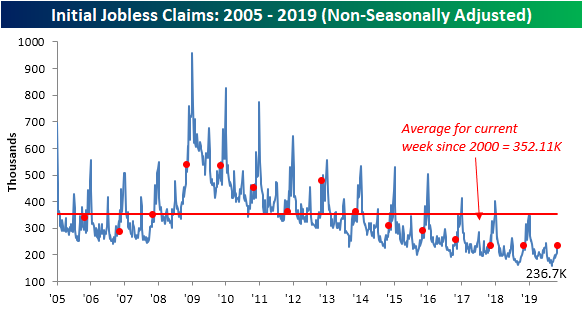 As we have mentioned in the past, 2019 has seen a big increase in the number of weeks with a year-over-year increase in the non-seasonally adjusted data.  So far this year there have been a total of 19 weeks were claims have risen YoY.  Given there are only 7 weeks left in 2019, it won’t be possible to reach similar levels to the financial crisis, but 2019 has seen the highest frequency these weeks for all years of the current cycle.  One interesting point to note though is that weeks with these types of changes in claims have also been subdued in the years following the last recession.  As shown in the chart below, of the past 20 years, the years prior to 2009 would typically see a high number of weeks with an increase versus the prior year, but that has simply not been the case from 2010 on. That is, until this year. Start a two-week free trial to Bespoke Institutional to access our interactive economic indicators monitor and much more. 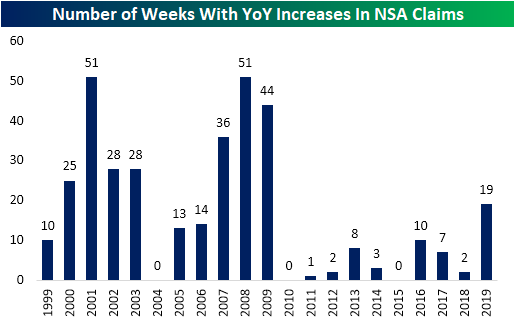