Initial jobless claims totaled 210K this week, matching expectations but rising slightly from an upwardly revised 206K last week. Despite the increase, claims remain low no matter how you measure it.

The past few weeks have seen claims come in at some of their strongest levels since the cycle low of 193K that was put in place back in April.  Without a continued move to the downside though, that April low is still firmly in place. That means it has now been 44 weeks without a new cycle low in seasonally adjusted jobless claims.  Looking back since the end of the Financial Crisis, that ties another 44-week long streak that came to an end in July of 2014.  Given claims remain at healthy levels just off of those cycle lows, this seems to point more towards the indicator having plateaued rather than deteriorating. 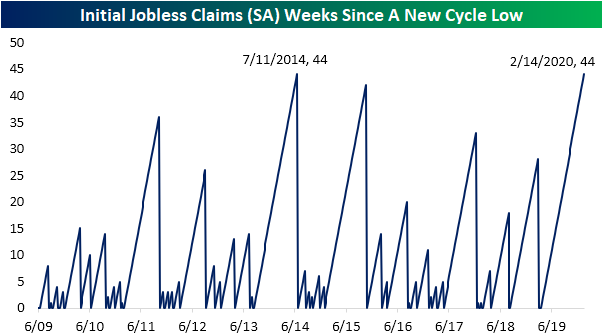 Even though claims rose this week, a higher reading of 223K rolled off of the four-week moving average which led the average to drop 3.25K. That leaves the four-week average at 209K which is the lowest reading since mid-April when it reached 206K.  That was also only one week after the moving average put in its cycle low of 201.5K 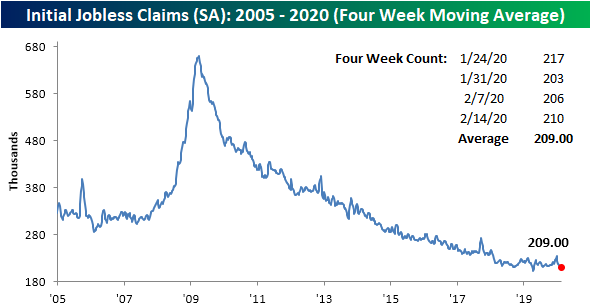 On a non-seasonally adjusted basis, jobless claims continued to decline as is seasonally normal for this time of year, falling to 208.3K. That is 2.4K lower than the comparable week last year and the lowest reading for the current week of the year for all years of the current cycle.  Given this, it is also well over 100K below the average for the current week of the year since 2000.  Start a two-week free trial to Bespoke Institutional to access our interactive economic indicators monitor and much more. 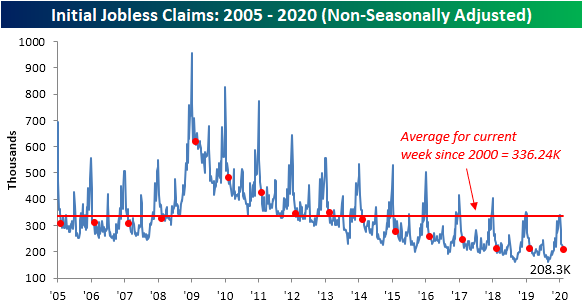