Just a month ago, initial jobless claims fell to one of their lowest levels since April’s multi-decade lows.  Since then claims have risen for three straight weeks, to 219K today.  That is the longest such streak of consecutive increases since the back half of May and early June.   Forecasts were expecting a print of 215K, which would have been unchanged from last week’s revised number. Jobless claims are now back to where they stood at the last week of August and are just 1K higher from where they stood a year ago. 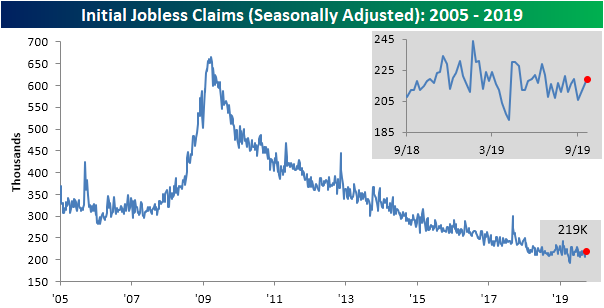 With the last week of August’s datapoint of 219K being replaced by an equivalent reading this week, the four-week moving average was unchanged from last week. Interestingly, there was no change year-over-year as well. Since 2000, the only other times this has happened (no change both WoW and YoY) was on August 23rd of this year, and in August of 2007.   Although claims remain at very healthy levels relative to the past, this lack of change is just another example of the deceleration in improvements that we have highlighted in the past. 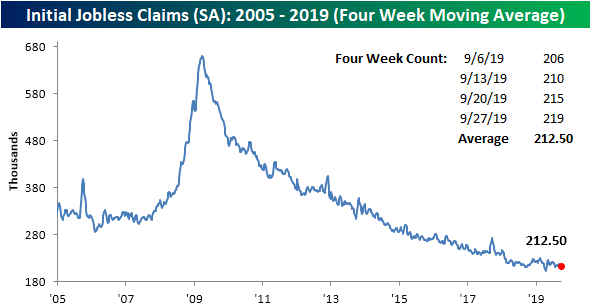 Coming in at 172K, NSA claims fell 3.4K this week.  Similar to the seasonally adjusted data, non-seasonally adjusted claims are right near where they stood one year ago.  This week’s reading was just 0.2K lower than the current week of the year in 2018. In regards to seasonal patterns, this year’s low has most likely been put in place by now, and claims will trend higher into the end of the year.  Start a two-week free trial to Bespoke Institutional to access our interactive economic indicators monitor and much more. 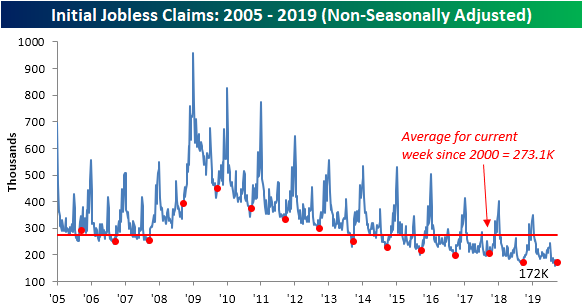