With the Veteran’s Day holiday tomorrow, the weekly release of jobless claims was pushed up to today.  Initial claims missed expectations falling to only 267K rather than the anticipated drop to 260K.  Last week’s number was also revised higher by 2K to 271K.  The decline this week marked the sixth week in a row of declines as claims are once again at the lowest levels since March 2020. In fact, this week’s level is only 11K above the March 14, 2020, pre-COVID surge level. 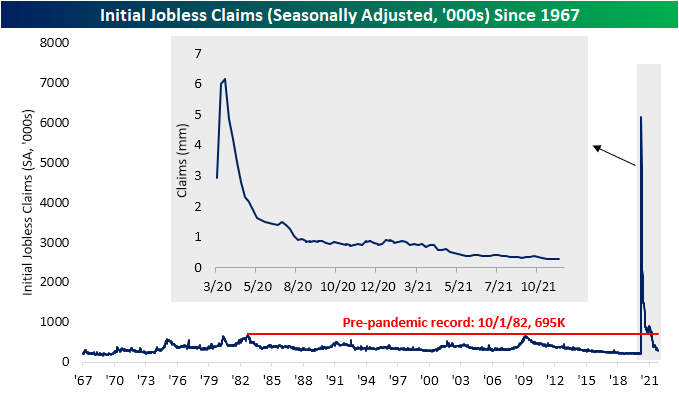 On a non-seasonally adjusted basis, claims were actually higher as could be expected given the seasonal headwinds of this time of year.  For the current week of the year, initial claims have historically risen 85% of the time week over week; one of the highest readings of any week. PUA claims meanwhile fell below 2K as the program continues its unwind. 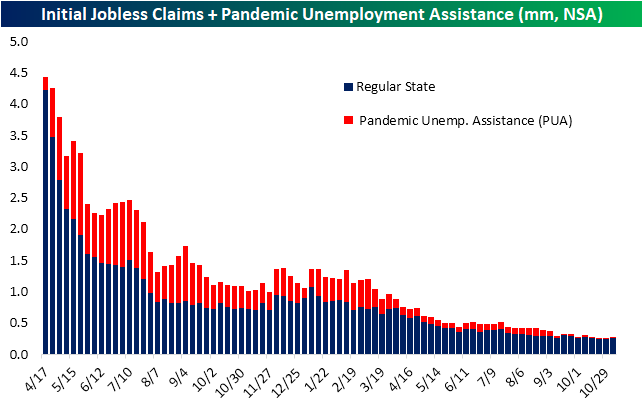 Continuing claims ticked higher this week rising from 2.10 million to 2.16 million on a seasonally adjusted basis.  That is the first increase in six weeks but it is a modest one, especially relative to the past few weeks’ declines.  Even after the increase, continuing claims are still 79K below levels from two weeks ago. 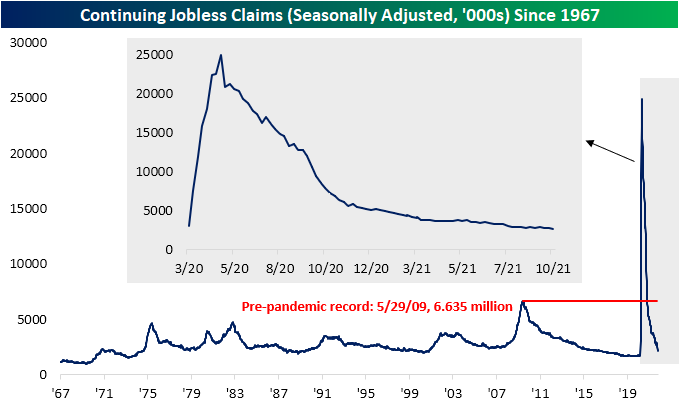 Delayed an extra week, the inclusion of all other programs showed yet another drop in continuing claims on an unadjusted basis. Total claims across all programs fell to 2.57 million, down roughly 100K from the previous week. Essentially that entire decline was on account of regular state claims with the moves in PUA and PEUC claims basically netting out. There continue to be some residual claims from pandemic era programs, but they now account for a significantly smaller share of claims than was the case only a few months ago, and generally, those claim counts have declined. 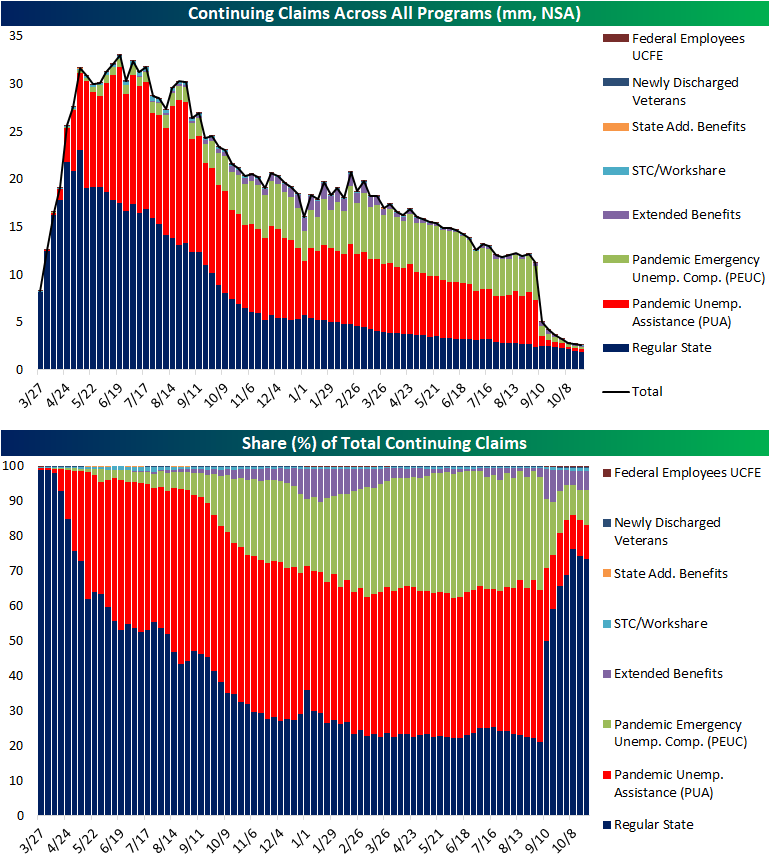 In the matrix below, we show a state-level breakdown of jobless claims.  For the most part, states currently have claims counts around new lows, but there are a handful of states that are trending higher like Iowa, Kentucky, Minnesota, Tennessee, and Vermont.  As mentioned previously, those reversals in trend are likely a result of seasonal headwinds. Click here to view Bespoke’s premium membership options. 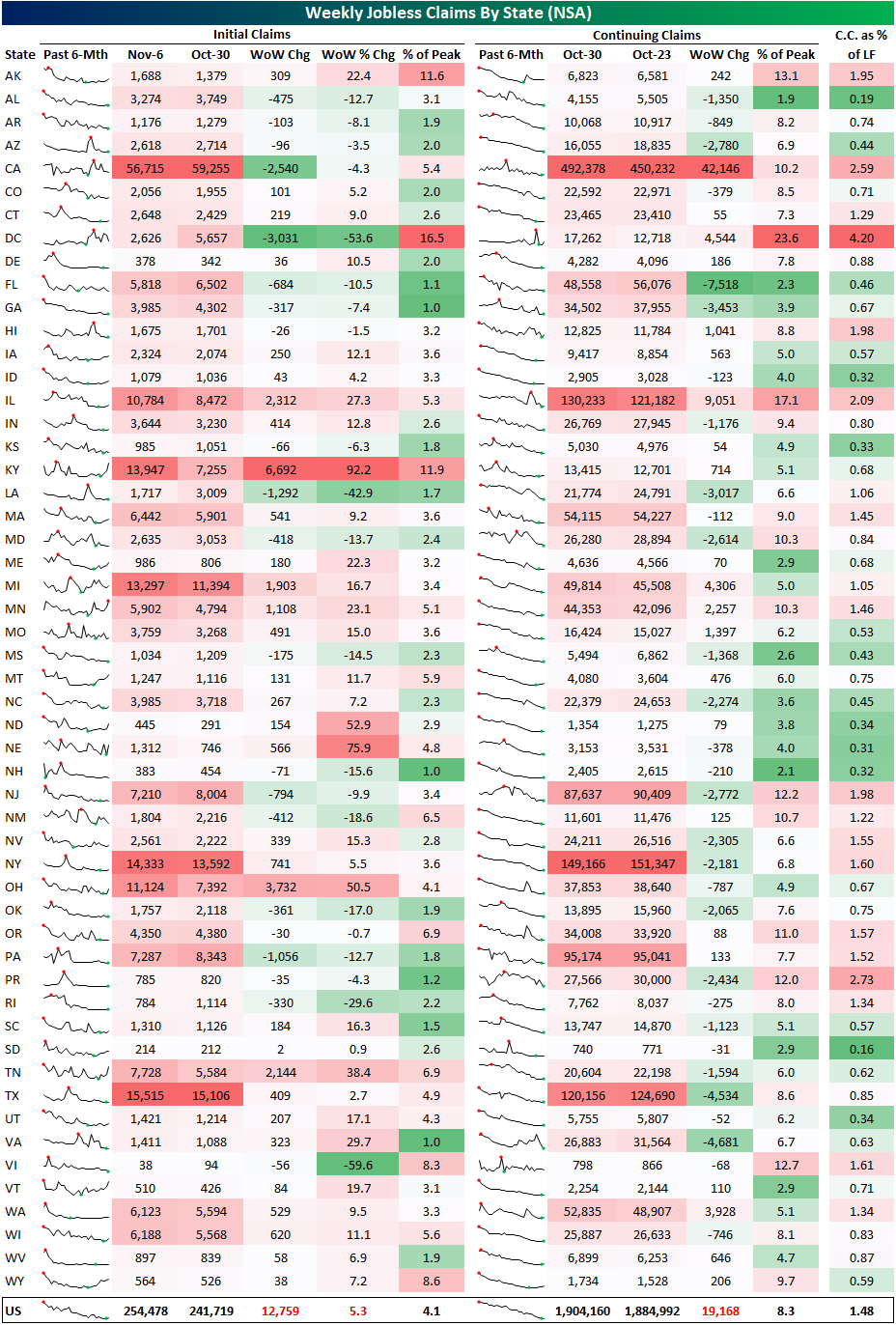