Earlier today, we updated our weekly Stock Scores with major US airliner JetBlue (JBLU) taking the number one spot.  Our Stock Scores ranks every company in the S&P 1500 based on a fusion approach, combining proprietary ratings across fundamental, technical, and sentiment analysis.  JBLU is one of the smaller US airlines with a total market cap of $5.2 bn compared to competitors like Delta (DAL), Southwest (LUV), United (UAL), and American Airlines (AAL), which all have market caps between $10 bn and $32.8 bn.  While earnings for this industry have not necessarily been weak, those companies exposed to the ongoing Boeing 737 MAX saga have continued to report headwinds, and shutdowns on account of the coronavirus have added more uncertainty to the overall outlook of the industry.  But for JBLU, the picture is a bit rosier.  Unlike some of its larger competitors, JBLU does not fly the 737 MAX, and its flights to Asia are limited when compared to other airlines as it focuses on the domestic, Caribbean, and Latin American markets.  This contributed to a solid quarter recently as the company exceeded EPS estimates and reported stronger than expected revenues which were up 3.2% YoY.

Headed into its most recent earnings report on January 23rd, JBLU reached the upper end of the past two year’s range as shown in the chart below. The 6.41% rally on earnings lifted the stock back above the $20 resistance level which it has since come back and successfully retested. 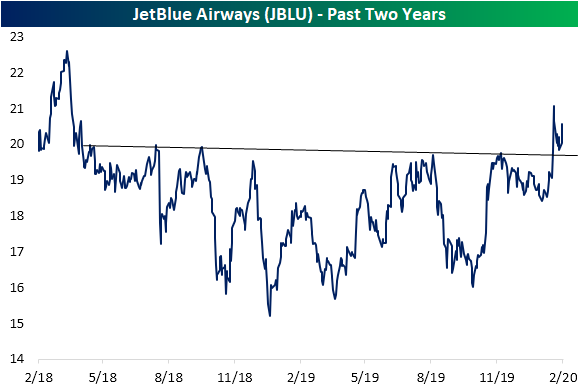 Again, JBLU’s breakout has been more of an exception rather than the rule for the industry. The chart below of the U.S. Global Jets ETF (JETS), which tracks the global airline industry including operators and manufacturers, shows exactly this.  Like JBLU, in the first weeks of this year, the ETF had been testing the past year’s highs, but once coronavirus fears began to ramp up (namely as Delta, American Airlines, and United Airlines began to suspend service to China), JETS turned sharply lower and has fallen out of the past few months’ range.

After these declines, the average airline stock in the S&P 1500 now has the lowest P/E ratio of all GICS Level 3 Industries. Given this, JETS has one of the cheaper valuations of the ETF universe. The fund’s P/E ratio is now only 8.76 which is also especially cheap when compared to a 23.12 P/E for the broader Industrial Sector ETF (XLI). Overall, although the 737 MAX and more recent coronavirus headwinds have not gone away, the airline industry is now looking relatively cheap to the rest of the market and JBLU appears to be the best of breed of these stocks.  Start a two-week free trial to Bespoke Institutional to access our Stock Scores, Custom Portfolios, and much more. 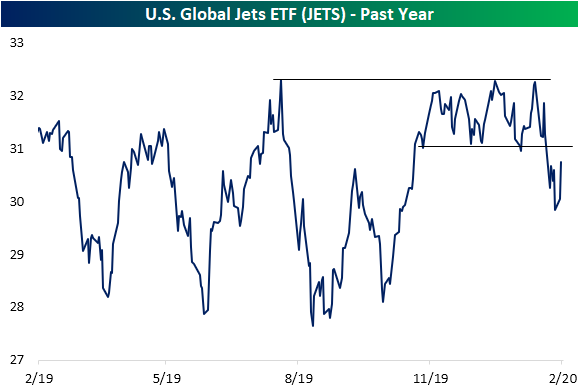