In today’s Chart of the Day, we detailed how the S&P 500 has swung down then up by over 1% in back-to-back sessions as the index sits just off of record highs.  Over in Japan, the Nikkei has seen even more wild swings with a 3.29% decline yesterday followed by a 3.12% gain overnight.  In terms of that decline yesterday, there was an even larger single-day drop as recently as February, but the bounce overnight marked the biggest single-day gain in a year and one week.  The past couple of days also marked the first time since June of last year that Japanese equities fell at least 3% in one session and then rallied 3% or more in the following session.

In the chart below, we show the Nikkei going back to 1970 with every other time the index has experienced a similar-sized move. Such moves of a 3% decline one day and a 3% rally the next have been relatively uncommon.  In total (including this week), there have been only 30 days with these types of back-to-back moves.  Again, the most recent occurrences were on June 15/16th and March 26/27th of last year.  Prior to that, there was not another occurrence since November 2016 in the wake of the US Presidential Election. While there have not been many of these instances in the grander scheme of things, they have occurred with some regularity with an instance every few years or so with the biggest gap between occurrences being in the early 2000s. 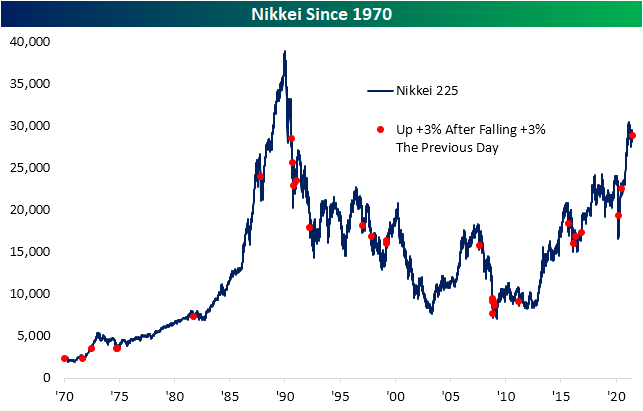 Given it has been over a year since we have seen such a move, in the table below we show each of the 19 past times in which the Nikkei fell at least 3% followed by a 3% or larger rally without another instance in the prior 3 months. For each occurrence, we show the Nikkei’s move over the next day, week, month, 3 months, 6 months, and year.

Only three of these instances—in 1971, 1990, and 1992—saw a similarly volatile session (defined as at least a 3% move) on the third day, and each of those saw a move lower. While it has not necessarily been common for that volatility to continue for a third consecutive day, in aggregate the next day has pretty much been a toss-up averaging a 47 bps decline (median 18 bps gain) with a positive move only slightly better than half the time.  Weakness has most consistently been seen one week out as the Nikkei has experienced a median decline of 1.39%.  The last occurrence in March of last year, in fact, saw the biggest decline one week out when the Nikkei fell over 8%.  While there is again some underperformance six months after such moves, one, three, and twelve months later all have seen the Nikkei outperform the norm and make a move higher more often than not.  Click here to view Bespoke’s premium membership options for our best research available. 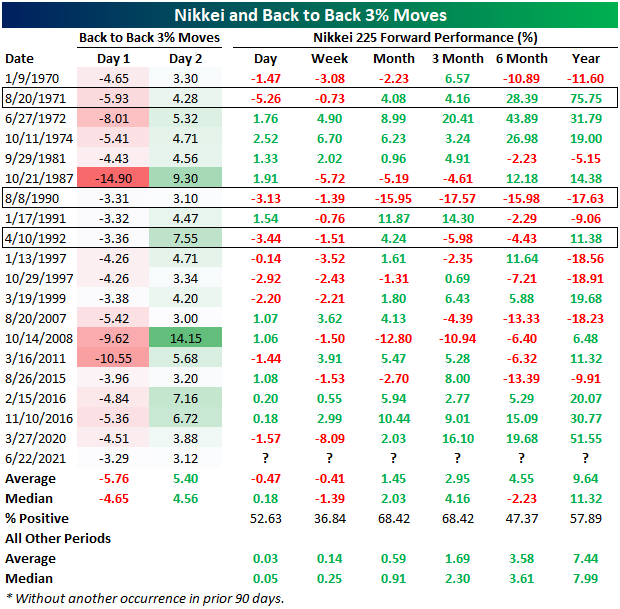