While the conference has been going on for decades now, the Kansas City Fed’s annual Jackson Hole Symposium has taken on increased importance and attention ever since the Financial Crisis as clues to future policy shifts have often been floated during the conference.  Heading into this year’s conference and Powell’s speech last Friday, anticipation was extremely high.  While markets weren’t expecting the Chair to say anything dovish, they were surprised by the directness and brevity of the speech in that the Fed would be hiking rates and it would likely cause pain for the markets and economy.  Since that eight-minute speech last Friday, the reaction in markets has been swift.  The chart below shows the S&P 500’s performance from the Thursday close during the Jackson Hole conference (the day before the Chair typically speaks) to the following Thursday.  With this year’s decline of 5.5%, the market’s reaction this year now ranks as the second most negative since at least 1994, falling short of just 1998 when the S&P 500 declined by 5.8%. Click here to learn more about Bespoke’s premium stock market research service. 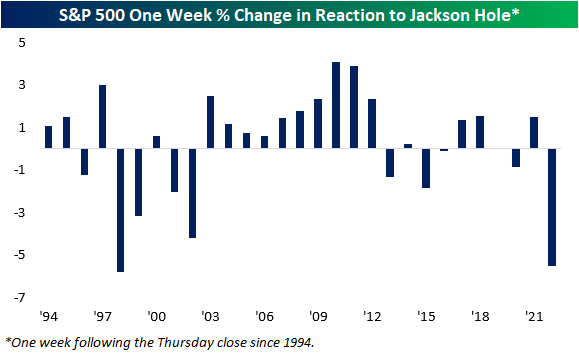 As mentioned above, the annual Jackson Hole conference has taken on added importance in recent years, so much so that anticipation of the conference is usually just as high or even higher than what we tend to see ahead of FOMC policy meetings.  With that in mind, we wanted to see how this year’s decline following the Jackson Hole speech compares to market reactions to prior FOMC meetings. The chart below shows the historical one-week performance of the S&P 500 following all scheduled and unscheduled FOMC meetings since 1994 with the red line indicating the S&P 500’s performance in the week following this year’s Jackson Hole meeting.  The S&P 500’s decline over the last week in response to Powell’s direct message ranks as more severe to the downside than only four other meetings since 1994 (two in March 2020, December 2018 and September 1998). Again, the reason for the market’s swift response has been Powell slamming the door shut for any hints of an upcoming Fed pivot and even referencing Paul Volcker by name when he discussed the importance of keeping inflation in check. That has led the market to price in sustained levels of higher rates, which disproportionately impacts growth and speculative stocks. 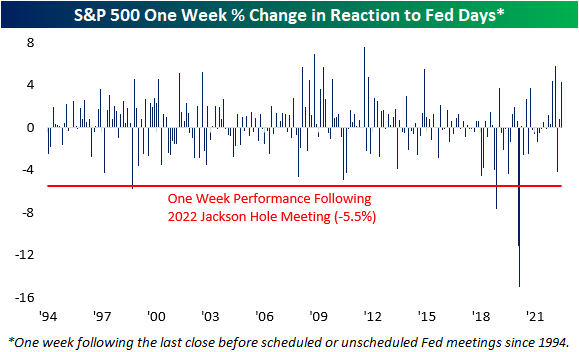