Within the details of the report, two trends stood out.  First, in terms of both starts and permits, single-family units were the star of the show.  Single-family Housing Starts rose 8.5% m/m and more than 22% on a y/y basis, while single-family Building Permits also saw similar levels of increases.  In both cases, September’s levels for single-family units were the strongest since mid-to-early 2007. The second notable trend evident in this month’s report was a very strong environment in the Northeast.  On a m/m basis, Housing Starts in the Northeast surged 66.7% while Permits increased over 25% m/m.  There’s been no shortage of stories out there highlighting the exodus out of big cities like New York, and these trends suggest former residents of the Big Apple are moving out to the greener pastures of the suburbs. 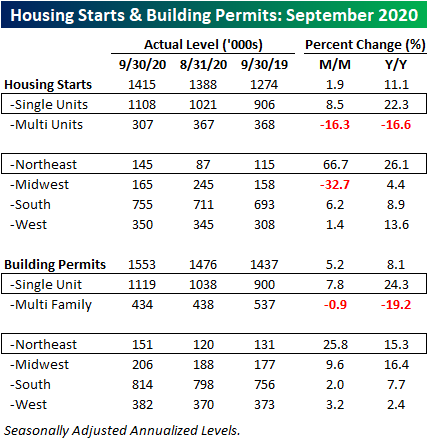 From a longer-term perspective, the quickly improved residential housing market bodes well for the broad economy. Housing Starts and Building Permits typically roll over leading up to and then plunge during recessions.  This time around, the nature of the pandemic and the shutdowns were so instantaneous that economic data didn’t have time to roll over, and the massive amounts of subsequent stimulus and liquidity made the pullback short-lived.  What’s most amazing about where things stand now is that even as the NBER hasn’t even announced the official end of the recession, Housing Starts on a 12-month average basis are already near their pre-recession highs!  Normally, once a recession ends, it takes years before Housing Starts get back to their prior highs. 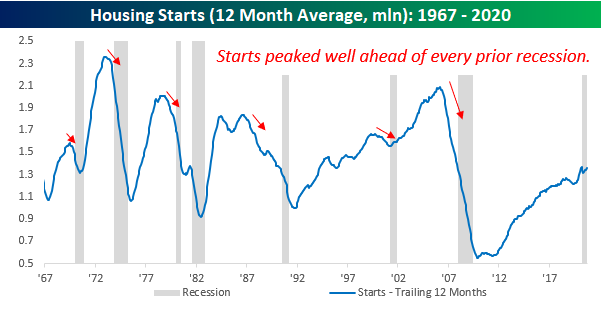 Taking a closer look at more recent data, the chart below shows the 12-month average of both Housing Starts and Building Permits over the last ten years.  Incredibly, from their late 2018 highs through mid-2019 lows, both saw larger declines than they did during the pandemic. 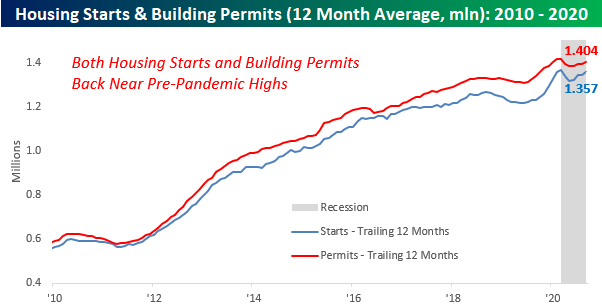 While the 12-month average of Housing Starts and Building Permits are knocking on the door of new multi-year highs, the strength in single-family units has already pushed those readings to new post-financial crisis highs. Whether or not the economy rolls over again as economic momentum stalls out is up for debate, but looking at this data and the homebuilder sentiment data from Monday, it’s hard to look at it and say that the recession is not over.  Click here to view Bespoke’s premium membership options for our best research available. 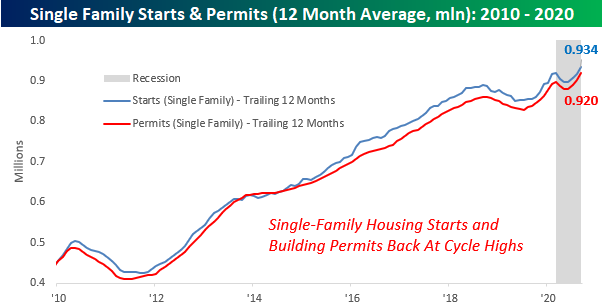