Spring is meant to be a season of growth, but that’s the last way to describe what’s been going on in financial markets for the last several weeks.   The S&P 500 came into April with a three-week winning streak on Friday, April 1st, but in what has been one of the cruelest April Fools pranks we’ve ever seen, the S&P 500 was down for seven straight weeks in what was the longest weekly losing streak since March 2001.  For the DJIA, the streak was even more extreme with eight straight weekly declines for the longest run of consecutive declines in 99 years. 99 years is a long time.

As shown in the chart below, the streak that ended this week was one of just three other periods where the S&P 500 was down for seven or more straight weeks.  The other three were in May 1970 (8 weeks), March 1980 (7 weeks), and March 2001 (8 weeks).  Besides relentless selling over several weeks, the other factor these three periods have in common is that they all occurred during recessions.  May 1970 was right in the middle of a recession, March 1980 was two months into the first of the ‘double-dip’ recessions in the early 1980s, and March 2001 came just as the economy was starting to roll over from the dot-bomb fueled contraction.  Economists have assured anyone who will listen that the economy isn’t close to a recession yet, but then again, in Q1 the economy contracted by 1.5%, and the latest projection from the Atlanta Fed’s GDPNow model currently has a forecast of just 1.9% growth for Q2. 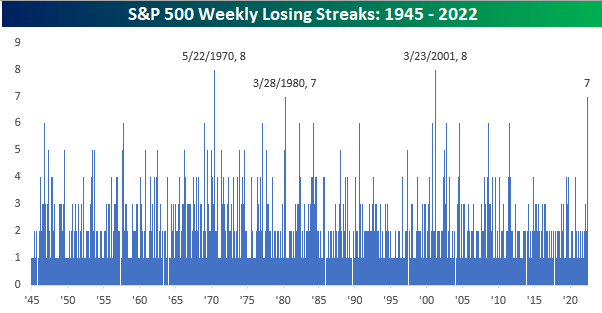 As an investor, whether we’re in a recession or not at this point is almost irrelevant.  Equities have already fallen sharply. The more important question is where the economy is going.  Anyone who has that kind of crystal ball has a distinct advantage.  Think about it.  When a recession begins, no one watching just the economy ever knows what is about to unfold.  They may be thought of as periods of economic weakness and high unemployment, but the start of a recession also coincides with the point at which the economy is at its strongest and firing on all cylinders.  The last thing on anyone’s mind at that point is a recession.

In terms of the prior streaks where the S&P 500 declined for seven or more weeks in a row, forward performance was mixed but generally positive.  Three is admittedly a small sample size, but one, three, six, and twelve months later, the S&P 500 was higher at least two out of three times, and three months later (13 weeks) it was higher all three times.  2022 has been a lousy year so far.  Wouldn’t it be nice, though, if six months from now at Thanksgiving, instead of everyone worrying about a new emerging strain of COVID (like we did last year), we were all thankful that stocks and bonds stabilized and maybe, just maybe, even partly dug themselves out of the hole they’ve already put themselves into? Click here to learn more about Bespoke’s premium stock market research service.