It Doesn’t Get Much Worse Than This For Crude Oil

Crude oil prices are down close to 10% today in what is shaping up to be the worst day for crude oil since late 2014.  That’s more than five years.

Today’s decline is pretty much a continuation of what has been a one-way trade for the commodity ever since the US drone strike on Iranian general Soleimani.  The last time prices were this low was around Christmas 2018. 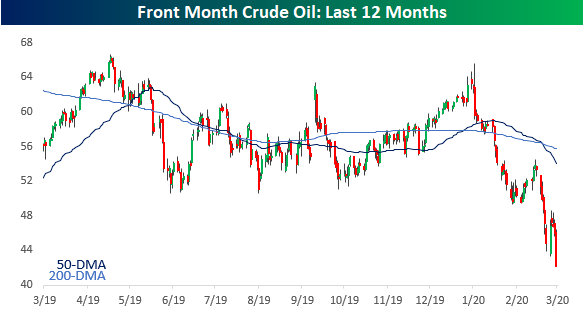 With today’s decline, crude oil is now off to its worst start to a year in a generation falling 32%.  Since 1984, the only other year that was worse was 1986 when the year started out with a decline of 50% through March 6th.  If you’re looking for a bright spot, in 1986, prices rose 36% over the remainder of the year.  The only other year where crude oil kicked off the year with a 30% decline was in 1991 after the first Iraq war.  Over the remainder of that year, prices rose a more modest 5%. Start a two-week free trial to Bespoke Institutional to access all of our research an interactive research tools.