It hasn’t been a great day for US economic data.  Less than two hours after the ADP Private Payrolls report missed expectations by around 75K, the November reading in the ISM Services index came in weaker than expected, falling from 54.7 down to 53.9 and below consensus forecasts for a reading of 54.5.  Combining this morning’s report with the ISM Manufacturing report from Monday and accounting for each sector’s weight in the overall economy, the November ISM fell from 54.0 down to 53.3. 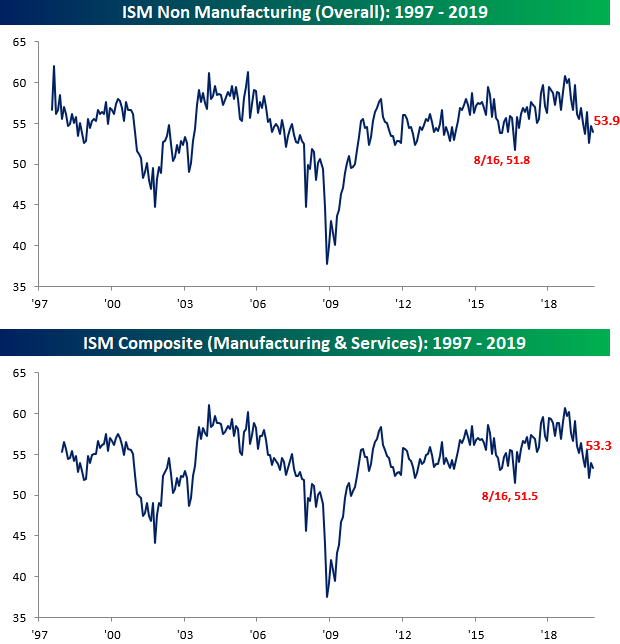 Looking at the internals of this month’s report, the m/m readings were mixed, while the y/y readings were all lower. Relative to October, more components actually saw increases (5) than declines (3), while two were unchanged.  Furthermore, we didn’t see any increase in the number of components in contraction mode (below 50).  On a y/y basis, not only is every component lower versus last year at this time, but they are down pretty significantly with an average decline of 6.2 points. 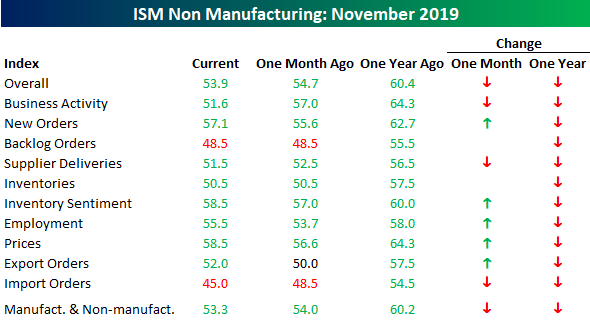 The biggest decliner of them all on a y/y basis is Business Activity. Back in February, this component climbed to its highest level since August 2005.  Now, just nine months later, it’s down to its lowest level since December 2009.  From a 14-year high to a 10-year low in just nine months.  Pretty quick turnaround.

Behind Business Activity, the Imports component of the ISM Services report has also seen a large pullback.  After falling from 48.5 down to 45.0, this component is now at its weakest reading since July 2012.

One bright spot in this month’s report, especially with the November Non-Farm Payrolls report coming up on Friday, was the Employment component. With an increase from 53.7 up to 55.5, it saw the largest two-month gain since January 2018.  Start a two-week free trial to Bespoke Institutional to access our research reports, interactive tools, and more. 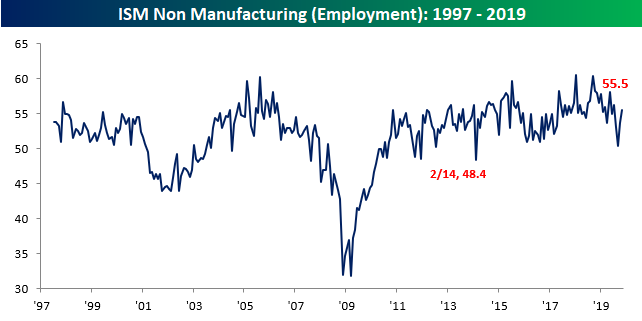