In what could have been the most anticipated economic indicator of the week after Tuesday’s stinker ISM Manufacturing report, the ISM Services report for September was a pretty big disappointment relative to expectations.  While economists were expecting the headline reading for the index to come in at 55.0, which would have been down 1.4 points relative to August, the actual reading came in at 52.6.  That 3.8 point decline was the largest m/m decline since August 2016, which is also the last time the headline index was as low as it is now and the second largest one month decline of the entire expansion.  Similarly, on a combined basis and accounting for each sector’s share of the overall economy, the Composite ISM report for September fell to 52.1 from 55.6.  That’s also the lowest level since August 2016. 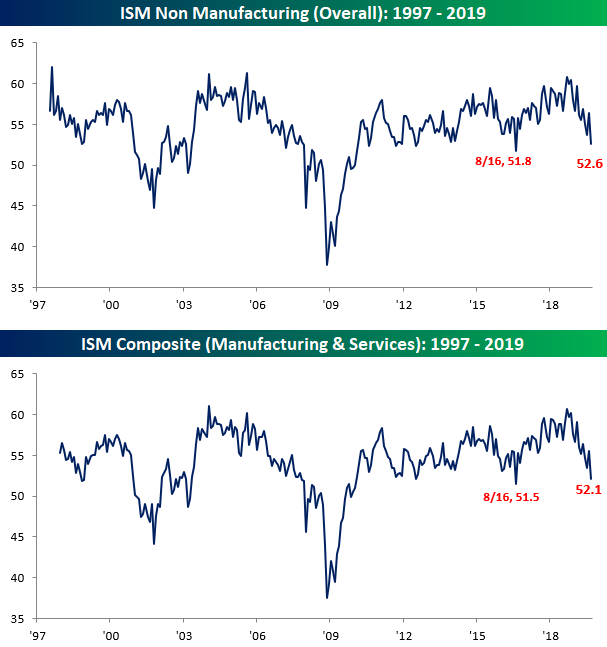 Breadth in this month’s report was mixed depending on how you look at it.  On a month/month basis, half of the index’s sub-indices actually increased with the biggest gains coming from Backlog Orders and Inventory Sentiment.  On the downside, New Orders and Business Activity both plunged. While m/m readings were a bit mixed, y/y readings were weak across the board with every component lower now than they were at this point last year. 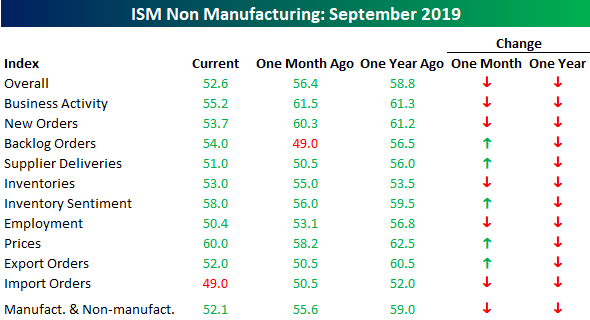 In terms of the individual sub-indices, three we wanted to highlight are New Orders, Employment, and Prices Paid.  First, New Orders saw the largest decline of any component this month falling to 53.7 and taking that index to its lowest level since August 2016. With tomorrow’s Non-Farm Payrolls report on deck, the Employment component of today’s ISM Services report wasn’t very encouraging as it dropped from 53.1 down to 50.4.  That’s the lowest level and also the largest two-month decline for the index since February 2014.  Finally, one area of the ISM Services report that had been bucking the trend lately is Prices Paid, which has now increased on a m/m basis in three of the last four months. That’s one area where we don’t want to be seeing steady increases in a sea of red everywhere else. Start a two-week free trial to Bespoke Institutional to access our interactive economic indicators monitor and much more.